Israeli minister couldn’t participate in COP26 because of inaccessibility 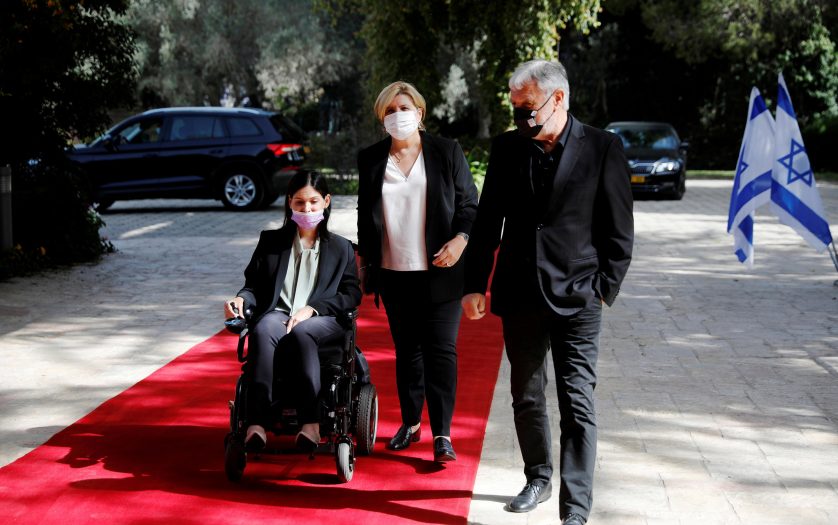 Karine Elharrar, Orna Barbivai and Meir Cohen from the Yesh Atid party arrive for consultations on the formation of a coalition government, at the President's residence in Jerusalem April 5, 2021. Photo: Amir Cohen/Reuters

Israel’s energy minister Karine Elharrar could not participate in the United Nation’s COP26 summit in Glasgow on Monday because her transportation was not accessible for wheelchair users, she said in a T.V. interview.

Elharrar has muscular dystrophy and uses a wheelchair.

Karine Elharrar told Israel’s Channel 12 she could not reach the conference grounds because the only options to get to the gathering area were to walk or board a shuttle that was not suited for a wheelchair, reported Reuters.

After learning about the incident, Israeli PM Naftali Bennett contacted Elharrar, saying it was “unacceptable” that she was left out of Day one of the UN climate summit and that for Day 2, her vehicle will arrive as part of his official motorcade, thus ensuring her entry, reported The Times of Israel.

“I came to COP26 to meet my counterparts in the world and advance our joint struggle against the climate crisis,” Elharrar wrote on Twitter. “It’s sad that the United Nations, which promotes accessibility for people with disabilities, in 2021 doesn’t worry about accessibility at its own events.”
She said she hoped a solution would be found by Tuesday.

Israel’s foreign minister called out the conference organizers, saying: “It is impossible to worry about the future, the climate and about people if we do not first take care of human beings, accessibility and disabilities.”

“I am disturbed to hear that Karine Elharrar was unable to attend meetings at COP26. I apologise deeply and sincerely to the minister. We want a COP Summit that is welcoming and inclusive to everyone,” Neil Wigan, British ambassador to Israel, said on Twitter.