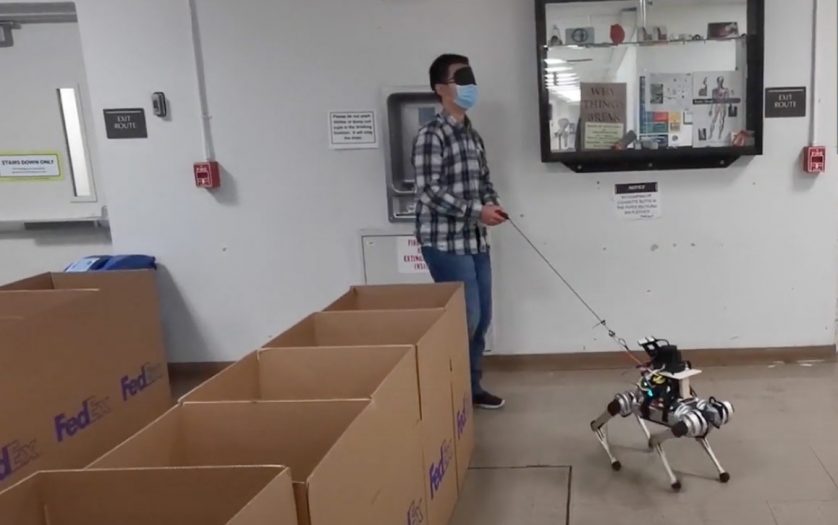 Researchers in California have developed a guide dog bot that can help people with vision disabilities navigate around barriers.

Just like a real assistance canine, the bot guides its user by means of a leash.  The setup — built on a robot design called a mini cheetah — features a laser-ranging system to map out its surroundings and a camera to track the human it is guiding.

Given a location, the system maps out a simple route, adapting its course to accommodate obstacles and the user’s movements.

The robot could potentially reduce the time and massive cost of training guide dogs — although, they would obviously lack the mental and social benefits of a real animal.

Lead researcher and roboticist Zhongyu Li of the University of California, Berkeley, said, “…we can directly deploy our code from one robot to another.  As time goes by and the hardware becomes more affordable, we can actually use this kind of dog to help, to serve, humans.”

In the testing phase, three blindfolded people were guided around an obstacle course that included narrow sections, less than three feet wide, and each test was successful.

In future development, the research team wants people to have the capability to sync their computer or smartphone calendars with the robot, which could then automatically take them to their appointments by means of GPS navigation.

“Our robot dog has a way of intelligence about navigation, from point A to point B,” Mr Li told New Scientist, adding, “An actual dog doesn’t know about navigating. This is an advantage of our dog.”

Tim Stafford, spokesperson for the UK charity Guide Dogs, said he supported the concept of robotic guides if it would help people with vision disabilities lead more independent lives.

“That being said, guide dog owners will frequently speak about their dog’s impact on their own life and well-being. They value their dog as a partner, companion and family member, as well as a guide dog,” Stafford said.

A pre-print of the researcher’s article can be read on the arXiv repository.

An eye-gaze tracking app can discern, with 90% accuracy, between…

Nottingham woman with vision disability not happy with e-scooters

A Nottingham woman with a vision disability was left bruised…

The COVID-19 pandemic has highlighted the importance of communicating in…