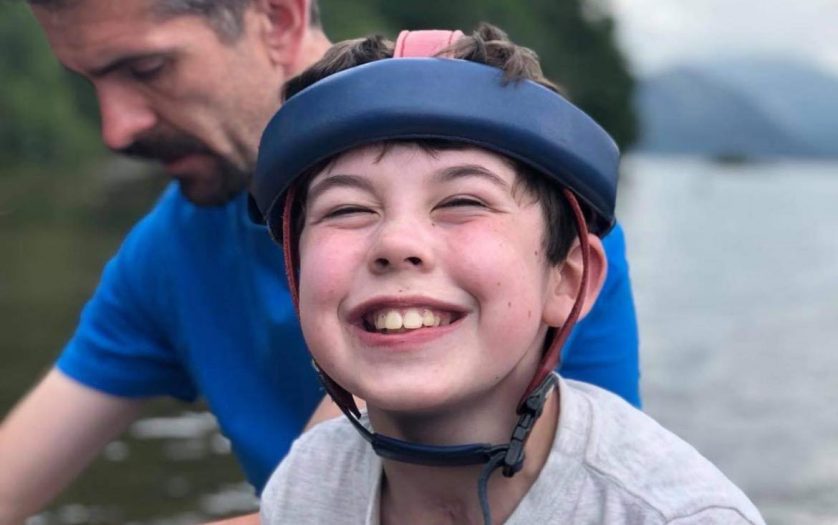 Oliver Voysey, 13, suffered a tragic brain injury when he was two days old, causing vision loss, cerebral palsy, epilepsy, autism, and learning disabilities.  The boy, from Newcastle, was a frequent visitor, along with his parents and sister, to Lake District Calvert Trust, an activity centre for children with disabilities.

He said that when he is at the centre, he feels like his disability “just disappears.”

“It’s the only place we can go as a family where we can all do the same activity,” his mother, Sarah, said.

“Gary (Oliver’s father) and I can really be parents there and not carers because the instructors help out supporting Oliver.  We can just be a family,” she added.

Due to the COVID-19 pandemic, the Keswick facility had to close, causing it to lose income in excess of £1 million.

Oliver began his Oliver’s Calvert Army fundraiser just two weeks ago to help save the centre — and has raised more than £178,000 for the charity that “changed his life.”

He raised funds by completing sponsored challenges with friends, family and members of the public donating through a GoFundMe page.

Sarah told the PA news agency, “I don’t think we thought we would get to £25,000.  The big financial donations will have a huge impact on the Calvert trust, but what has had a huge impact on us is the messages that people have sent.

“We set out to do these challenges and raise as much money as possible, but it has been really emotional and we have had so many phone calls of people saying thanks, and we feel like we are part of something.”

Leading up to Oliver’s 13th birthday, the family finished many “13” themed challenges, including scoring 13 goals in a penalty shoot-out, eating 13 party rings in one go, and completing a 13-minute walk.  On January 30th, Oliver’s birthday, he celebrated his birthday with a 13-layer chocolate cake.

After exceeding their original objective of £25,000, the family decided to “shoot for the moon” and aimed to raise as much money as possible — and actually raised more than seven times Oliver’s first goal.

More than 2,000 people have joined the fundraiser, doing themed challenges of their own.  The family hopes to have people in 13 different countries participate.

His father expressed, “It’s overwhelming, it hasn’t sunk in yet.”

Jennifer Scott, fundraising manager at the Lake District Calvert Trust, said, “Oliver’s Calvert Army is on the march.  Oliver is such an inspirational young man and we are immensely grateful to him and his family.”

Anyone wishing to donate to the fundraiser can visit the family’s GoFundMe page.