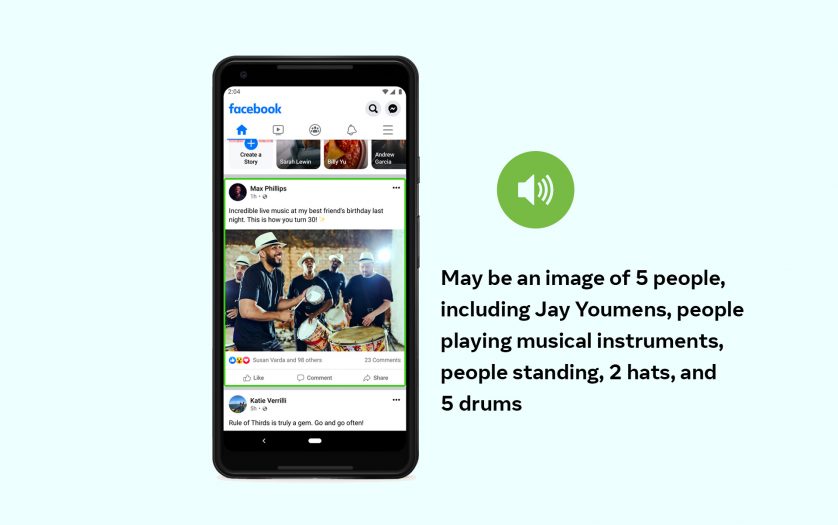 Facebook has announced a significant update to its Automatic Alt Text (AAT) feature, which automatically generates photo descriptions for people who are blind or have low vision.

Based on AI, the system can now recognize ten times more objects and scenes in photos shared on Facebook and Instagram, providing descriptions for people with vision disabilities.

AAT was introduced in 2016 to generate alternative text on photos to help people with vision disabilities understand what was going on in the picture.

According to Facebook, the company’s artificial intelligence technology can now identify activities, landmarks, types of animals, and various other details in the photos. This will make it easier for people with vision disabilities to understand the context of a photo shared on social networks.

AAT represents multiple technological advances that improve users’ photo experience. Facebook expanded the number of concepts that AAT can reliably detect and identify in a photo by more than 10x, which in turn means fewer images without a description. Descriptions are also more detailed, with the ability to identify activities, landmarks, types of animals, and so forth — for exMaybe “May be a selfie of 2 people, outdoors, the Leaning Tower of Pisa.” according to the social network.

To access the detailed photo descriptions on iOS, users must use the new custom actions through VoiceOver. On Android, you have to long-press the image.

AAT is available for Facebook photos in News Feed, profiles, and groups. On Instagram, it’s available for pictures in Feed, Explore and Profile. Because alt text descriptions are phrased, they can be translated into 45 languages, Facebook says.

The Access Alliance is calling for nominations of New Zealand…

Despite the inherent challenges that voice-interaction may create, researchers at…