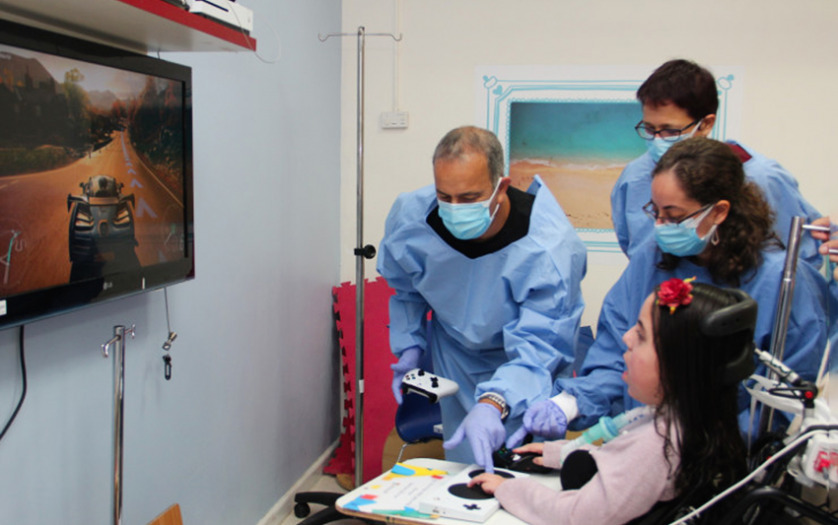 Twelve-year-old Lina and 10-year old Yael, both in a wheelchair due to a severe muscular condition that leads to loss of muscle function, were two of the six patients of Israel’s Alyn Hospital who recently got a specially designed Xbox from Microsoft that can help them with their treatments.

The Jerusalem children’s rehab hospital has often teamed up with startups and tech firms to promote assistive technologies, innovation, and accessible services for children who live with a wide range of disabilities. The tech firms provide the technical knowhow, while the hospital staff and patients outline the needs.

As part of this effort, the hospital approached a team at Microsoft that is responsible for the development of the Xbox Adaptive Controller, which makes Microsoft’s gaming console accessible for gamers with limited mobility. They asked them to adopt the controller to the needs of Alyn patients, to help them with their treatment and enable remote treatment for patients who have trouble showing up in person due to the coronavirus pandemic.

The Microsoft Israel research and development team got to work, and this week Yaron Galitzky, who is responsible for the Xbox Adaptive Controller development, visited the hospital and brought with him six packages that he donated to the Alyn children. Each package contained an Xbox, an adaptive controller, a laptop, a subscription for Xbox game packages, Microsoft Office, and a variety of games and creative programs.

Together, they spent the day going from one hospital bed to the next to install the systems and adapt the controllers to each child’s needs, assisted by one of Alyn’s occupational therapists.

“These are children who have disabilities but whose cognition is good,” Arie Yekel-Melamed, the hospital’s innovation manager, told The Times of Israel in a phone interview.

“They are clever children who are caught in their bodies with a variety of disabilities.”

Alyn uses advanced gaming as part of its therapy with the children, he said, but children who were isolated in the hospital wards or at home because of coronavirus restrictions had no access to these tools — or had to compete at home with their siblings to get access to a laptop.

“The idea was to bring some joy, exercise, and some therapy to these children,” he said. “You should have seen the light in their eyes, …it was amazing.”}

The hospital, he added, has worked together with tech firms and Microsoft to spearhead the development of products that improve rehabilitation, quality of life, and daily inclusion for children with disabilities. Microsoft Israel’s contribution will be “a role model for startups,” as it promotes inclusive design to make it possible for products to be used by people with disabilities.

Grants to support affordable rental housing for persons with disabilities

The U.S. Department of Housing and Urban Development today announced…

The Wyoming Arts Council, in partnership with The Wyoming Governor’s…