Cerebral palsy is what my daughter HAS, not who she IS

When I was told I was pregnant with twins almost 18 years ago, I was both scared and excited. Little did I know that one of my children was going to face more challenges than most do in a lifetime.

My girls, Dana and Colleen, were born 10 weeks premature at just 3.5 lbs.

The babies experienced many complications in their first few weeks of life: anemia, ROP (retinopathy of prematurity), tube feeds, oxygen issues, and a Grade 2 brain bleed.

After six long weeks in the NICU, they went home.

We soon noticed that Dana wasn’t meeting her milestones as Colleen was; she wasn’t rolling over, sitting up, or holding up her head as she should’ve been at her age.

At six months old, Dana was sent to a physiotherapist for treatments to improve her muscle tone.

At the age of three, Dana was diagnosed with cerebral palsy, likely caused by her brain bleed. Physiotherapy continued and I was now able to claim the disability tax credit and have access to services.

At four years old, Dana walked for the first time.

The girls’ attended a single-level elementary school; Dana used a walker and ankle-foot orthotics (AFO’s), so stairs weren’t an option.

Her teachers were dedicated to accommodating and including Dana.

Her friends were, and still are, amazing! When I was younger, I didn’t see any children with disabilities – they were segregated to “special” schools. I believe inclusion is so important because children will understand acceptance right from the start.

Dana received Botox injections in her hamstrings and calves to relieve the tightness in her muscles. Doctors at the Hospital for Sick Kids in Toronto, Ontario, decided surgery was the next best option and performed bilateral rectus femoris transfers, medial hamstring lengthening and gastrocnemius lengthening.

Another six weeks in hospital – and lots of pain and rehabilitation for Dana. I left my job to stay with her – Dana needed me – but that also meant being absent from Colleen’s life.

Dana was a superhero, learning to walk again. Her legs were in casts for several weeks. The surgery was a success – her legs were so straight! We went home just before Christmas, happily reuniting with her twin sister.

We’ve had many great experiences. When using the TTC (Toronto Transit Commission), people were so kind and helpful, telling us where the elevators and accessible entrances were located, and which venues offered discounts.

The best experience was when we went to Cuba. Dana couldn’t walk through the airports but didn’t need her wheelchair at the small resort. The crew at both the Toronto and Cuba airports were outstanding, assisting us every step of the way.

We’ve also had some bad experiences, like being met with indifference when we complained about clothing store change rooms not having seating.

Our worst experience was at Canada’s Wonderland, an amusement park in Vaughan, Ontario. Wheelchair rental prices were expensive and they didn’t offer us the “Access 2 Entertainment” discount (a Canadian program that provides support people with free or discounted admission at various venues nationwide).

Dana has caused sufficient change however – her high school’s accessible washrooms did not have locks or power doors. Because of Dana, the school was forced to correct this, something that, by law, should have been addressed long before she arrived.

Now that Dana is almost 18 years old, I’ve discovered that services are harder to acquire. We only see her physiotherapist once a year. This fall will her last session – she will be transitioned to community physiotherapists, an out-of-pocket expense.

I wish I knew the right questions to ask and what services Dana is entitled to – resources are not as forthcoming now that she is considered an adult.

Being a teenager is always challenging but it’s intensified when you’re a teen with a physical disability. Her friends do sports or walk to Tim Horton’s at lunch – things Dana has difficulty doing.

She had a boyfriend last year, and when the relationship ended, she was devastated. She believed he was the only guy that would like her for her and see past her disability.

Dana has experienced some mental health issues. As an able-bodied person, I don’t pretend to understand her life experience. Getting her help is impossible – wait times are unacceptable – over a year for a psychiatrist.

Dana is the strongest person I have ever met. She is my hero. I’m so proud of her.

Cerebral palsy is what she HAS, not who she IS. 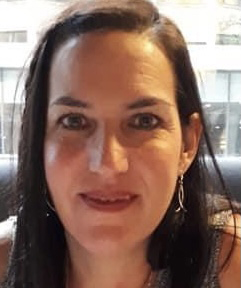 Julia Lant lives in Midland, Ontario, Canada, with her twin daughters, one of which has cerebral palsy, her fiancé, and stepdaughter. She is a Financial Planner for a well-known financial institution.