Food texture key to eating habits in children with Down syndrome 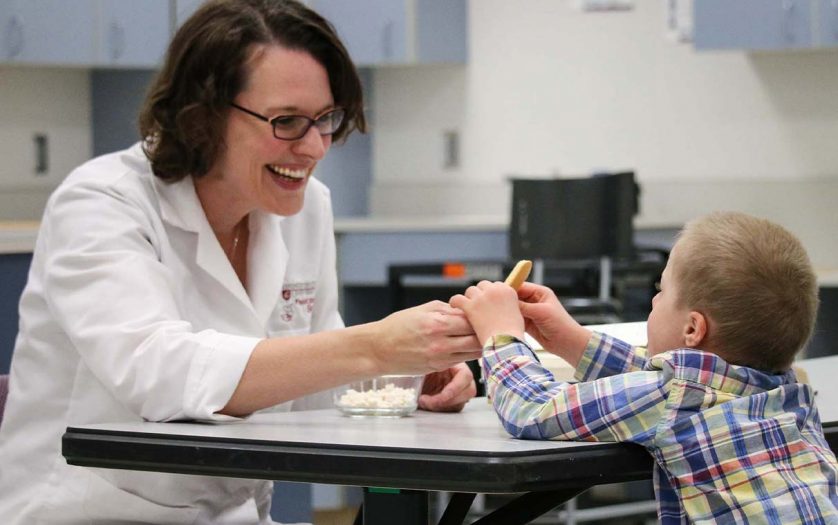 Children with Down syndrome prefer food with a crispy, oily mouthfeel and don’t like brittle or gooey foods. But those preferences can lead to a less nutritious diet, according to Washington State University research published in the Journal of Texture Studies.

The paper examined what food textures children with Down syndrome liked or didn’t like and how those preferences compared to typically developing children’s preferences.

In the U.S., one in 772 babies (around 5,100 each year), are born with Down syndrome, a genetic condition caused by a full or partial extra copy of chromosome 21. Feeding and swallowing impairments are common, and a key predictor of increased death among those individuals.

It’s been known for years that children with Down syndrome don’t eat as much as typically developing children, but nobody has studied food textures as a factor. This research could help clinicians and parents determine what foods will get eaten, while hopefully prompting food manufacturers to tailor products to this population’s specific needs, Ross said.

“This was a huge area of missing research,” Ross said. “There are many anecdotal stories, and you can go down an online rabbit hole to find information. But studies like this can help parents and clinicians know what these children will be most likely to eat and help reduce incidence of choking. If we can add nutritional value to those foods, then we’ll really help a lot of people.”

Choking is one of the leading causes of death among people with Down syndrome because they may not chew food enough or “pack” it, overfilling their mouths and cheeks without swallowing.

“We want to help people understand what food textures children with Down syndrome prefer, and how to move them from things like pureed foods to texturally complex foods, which tend to have more nutritional value,” Ross said.

Ross and her team sent boxes with 16 commercially available kinds of food to 218 children aged 11 to 18 in 30 states. Of those boxes, 111 went to children with Down syndrome, the rest to a control group of typically developing youth.

The boxes contained four items in each of four different texture groups to ensure that flavor wasn’t the reason for a texture preference. The research team asked parents about disliked flavors before the boxes were sent, to avoid those products. All children in the study ate one of each item every day for a week to make sure enjoyment wasn’t due to novelty.

The parents then filmed the children interacting with and eating each item, uploading the videos to the research team.

“We coded a lot of data; it’s the biggest home-use test involving children with Down syndrome that we’ve ever heard of,” Ross said. “And it showed a big difference in texture preference between children with and without Down syndrome.”