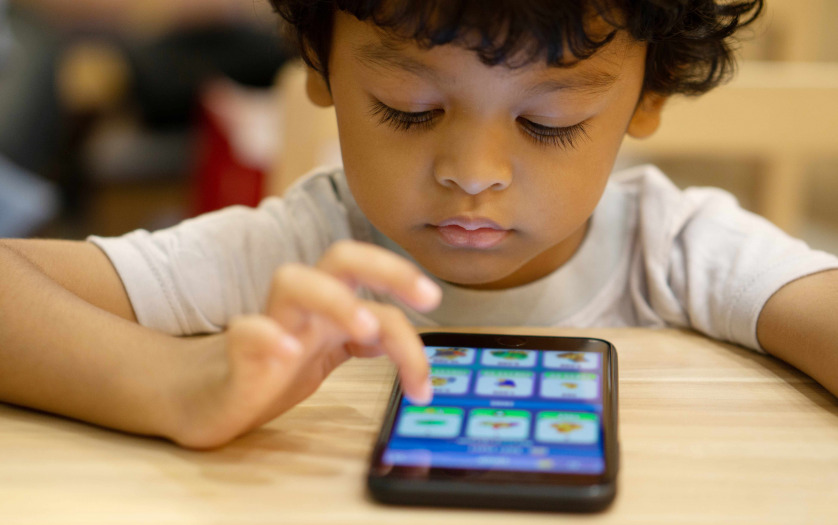 Two University of Mississippi graduate students in communication sciences and disorders have made strides in their studies of using augmentative communication/assistive technology to help people with communication disabilities.

Mallory Robertson, of Poteau, Oklahoma, and Tyler Standland, of Hattiesburg, both of whom completed master’s degrees this spring, have conducted research that may make it easier for children with language disorders to communicate effectively.

“Essentially in this case, aided language input is not just verbally speaking to your child, but demonstrating the use of the child’s device in an engaging way to model for their child that the AAC device can be used as a way for them to communicate with others,” Robertson said. “Our participants came from the HILL Program based in the UM Speech and Hearing Clinic.”

The HILL Language and Literacy Program provides intensive language therapy to young children with moderate to severe language disorders.
Robertson’s co-authors on the project are Gina Keene, a former employee of the Department of Communication Sciences and Disorders and a speech-language pathologist at Children’s Hospital Colorado in Colorado Springs, and Carolyn Wiles Higdon, an Ole Miss professor and speech-language pathologist.

“We were interested in learning more about the caregivers and their views of their child’s AAC, how confident they are in using the device and their response to a teletherapy training program,” Robertson said. “Parents and families are shown to have the biggest impact on a child’s likelihood to use their AAC devices.”

Standland studied whether a modified electronic toy could be used to help a visually impaired child with communication disorder.
Learning acquisition and operating AAC devices, such as a speech-generating device, typically rely on vision.

Standland adapted a VTech Learn and Dance Interactive Zoo to function as a speech-generating device for his project.

“For example, when a button on the toy is selected, instead of playing a song, the toy says a word that our client may want to frequently say,” Standland said. “The child in this project was already familiar with this toy from playing with it, so it did not require full use of vision to operate the device for communication.

“After implementing the new device in speech therapy sessions, we collected data that revealed significant communicative growth.”
For his study, Standland’s research team included Keene; Steven Townsend, a principal applications developer in Mobile, Alabama; Higdon; and the participant of this case study and his family.

As a result of Robertson and Standland’s recent work, they were able to showcase their talents at the Assistive Technology Industry Association, or ATIA, international meeting.

Standland previously presented in Washington, D.C., at the American Speech-Language-Hearing Association in November 2021, and both Standland and Robertson presented at the Department of Communication Sciences and Disorders’ Fall Institute on the Ole Miss campus.
ATIA is the world’s largest organization bringing together makers, distributors, teachers and users of assistive technology for all types of disabilities. Assistive technology is any item, equipment, software program or product system that is used to increase, maintain or improve the functional capabilities of persons with disabilities.

“Accepting Mallory and Tyler’s emerging research in their two areas of augmentative communication/developmental delays and cortical visual impairment/assistive technology highlights the Department of Communication Sciences and Disorder’s development to make the world more accessible to everyone by building connections within our university and local community,” Higdon said.

“Every member of this department offers unique knowledge and training to the students, so it takes a village.”

Higdon praised both students’ drive and engagement with their chosen professions.

“Mallory and Tyler have not only an excellent work ethic, but an internal drive to make a difference in our field,” she said. “They are innovative and creative, with the ability to take their academic and clinical training to a new level with their abilities to see the next step needed in clinical services or in technology needs.”

Levitate Technology has announced the launch of The Levitate Gravel…