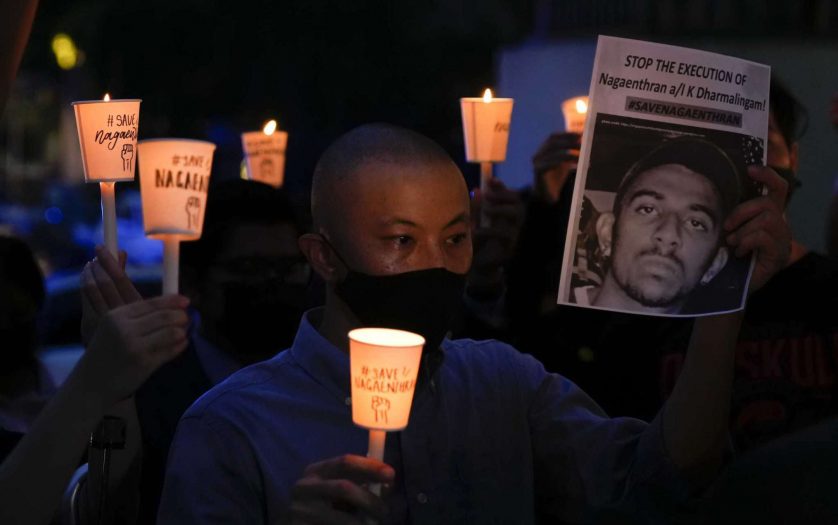 Activists attend a candlelight vigil against the impending execution of Nagaenthran K. Dharmalingam, sentenced to death for trafficking heroin into Singapore, outside the Singaporean embassy in Kuala Lumpur, Malaysia, Monday, Nov. 8, 2021. Singapore's High Court has halted the imminent execution of a Malaysian man believed to have a mental disability, amid pleas from the international community and rights groups. AP Photo/Vincent Thian

Singapore’s High Court has suspended the execution of a Malaysian man with a intellectual disability due to cries from international rights groups.

Nagaenthran K. Dharmalingam, 33, was scheduled to be executed by hanging on Wednesday for attempting to smuggle less than 43 grams (1.5 ounces) of heroin into the country, reported The Washington Post.

The court granted a stay of the execution after Nagaenthran’s defense lawyer, M. Ravi, contended that the death sentence for a person with a intellectual disability was a violation of Singapore’s Constitution.

Ravi’s application was rejected, but the stay on the execution was granted “pending the hearing of the appeal to the Court of Appeal,” Singapore’s top court, the lawyer wrote on Facebook.

The appeal is scheduled to be heard via videoconference on Tuesday. If the appeal is denied, the stay will be lifted and Nagaenthran could be executed as scheduled.

Narcotics officers discovered a small amount of heroin strapped to Nagaenthran’s left thigh at a checkpoint more than 10 years ago. He was sentenced to death in November 2010 under the country’s stringent drug laws. A previous appeal to reduce the punishment to life in prison failed and a final appeal for presidential lenience was denied last year.

Death penalty objectors said Nagaenthran’s IQ was revealed during a trial at the High Court as 69, a level that is internationally acknowledged as an intellectual disability.

However, the court decided that Nagaenthran understood what he was doing and maintained the death sentence.

Nagaenthran’s family lives in Ipoh in northern Malaysia. Activist Kirsten Han, who assisted his mother, two younger siblings and cousin with their travel to Singapore, told The Associated Press that they have been permitted daily prison visits since arriving last week.

“The main thing that I’ve heard from Nagen’s younger brother is that Nagen has been disoriented, he doesn’t quite make eye contact, and goes between periods of lucidity and confusion,” Han said.

“His brother even doubts that he fully grasps that his execution date is so close,” she added.

Nagaenthran’s older sister, Sarmila Dharmalingam, who didn’t make the trip, said she informed Nagaenthran about the court outcome during a phone call on Monday and that the family was still hoping for a positive conclusion. He thanked her, not saying much more, she said.

Dobby Chew of the Anti-Death Penalty Asia Network conveyed his displeasure that the High Court had disregarded Ravi’s argument.

Chew said he hopes Singapore will give appropriate time for the appeal. ADPAN and other human rights groups, including Amnesty International and Human Rights Watch, have called the execution inhumane and a violation of international law.

Legal experts, activists and human rights groups in Malaysia have demanded that Nagaenthran’s execution to be completely stopped.

On Sunday, the European Union delegation to Singapore, along with the diplomatic missions of Norway and Switzerland, called for the execution to be halted.

“Today, more than two thirds of the countries of the world have become abolitionist in law or practice, which confirms a global trend in favor of the abolition of the death penalty,” they said in a statement.

A petition demanding a presidential pardon for Nagaenthran has drawn almost 65,000 signatures. Family and friends of 13 current and former death row prisoners also wrote a joint letter to Singapore’s president on Monday calling for the death penalty to be abolished.

“It’s almost always the most vulnerable people, people struggling to make ends meet, immigrants in need of money, that are roped into criminal schemes, unable to defend themselves when caught and facing the court,” Branson said in a statement Monday.

“It’s impossible not to see the extent to which inequality, poverty and the death penalty are linked,” he added.

Singapore’s Ministry of Home Affairs insisted that Nagaenthran has been given full due process under the law.

“Nagaenthran considered the risks, balanced it against the reward he had hoped he would get, and decided to take the risk,” it added.

The last execution in Singapore was in 2019.