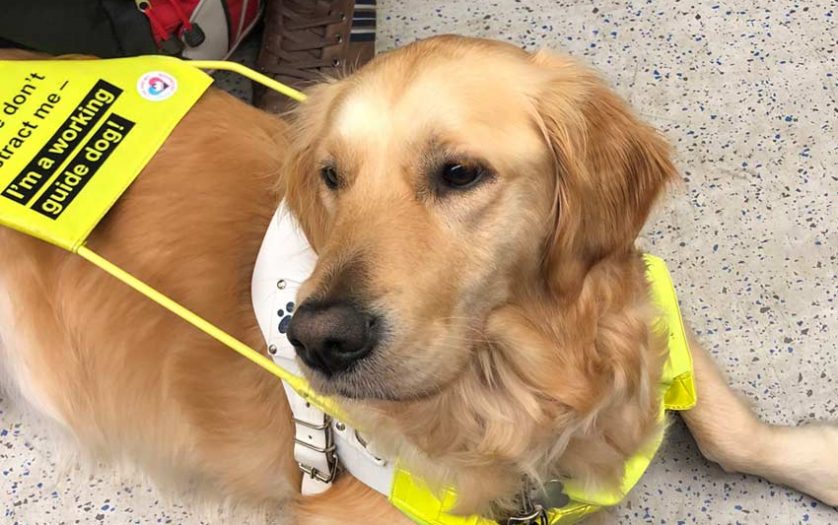 A notable disability advocate with a vision disability claims she was “screamed at” after she asked a stranger to stop petting her guide dog.

Dr. Amy Kavanagh, who has a vision disability called Ocular Albinism, was matched with her guide dog Ava one year ago.

Despite Ava’s training and readiness to work, Dr. Kavanagh said the pair were often put into dangerous situations by people wanting to pet her dog.

As reported by the Edinburgh News, London-based Dr. Kavanagh decided to share her experiences to expose the challenges encountered by people with disabilities and their guide dogs.

She has even posted a video from Ava’s point of view, demonstrating the distractions the dog has to deal with “pretty much every time” they venture out.

The activist, who often appears in the media – including on shows such as BBC Radio 4’s Woman’s Hour programme and Sky News, said distractions impact both her and Ava.

Dr Kavanagh said, “People will try and pet her or whistle at her while she is working and it can be confusing for me because she is my eyes.

“If she stops and does a different movement, I can think it’s because of a hazard like a set of steps or a car on the pavement and it can be really stressful or frightening.

“I had a woman pet her earlier this week just as Ava was showing me where the gap was at a train platform. That is the real risk and not to sound dramatic but we could die. She could be stopping me walking out in front of cars or falling down the stairs.”

“Guide Dog Ava is my eyes, she keeps me safe & has even stopped me walking out in front of cars. But like 71% of @guidedogs handlers I experience members of the public trying to distract Ava every day. If you see a Guide Dog please let them do their job #DontDiveOnTheDog pic.twitter.com/egMHQsGdVW — Dr Amy Kavanagh (@BlondeHistorian) October 21, 2021.”

Adding that Ava can also become distressed and lose focus when approached by the public, Dr. Kavanagh explained, “Her body language changes and she usually loves her job and loves being in busy places, but one example where it happened, she had a little cry because she was distracted. Sometimes she has been really distressed after.”

Although she tries to make people understand why they cannot pet Ava while she is working, people often put “their want to play with a dog above my boundaries.”

Most recently, Dr. Kavanagh described an incident in a cafe where a man screamed at her after she politely told him not to pet Ava.

Saying that sometimes people show affection to Ava out of kindness, thinking she never gets time to rest, Dr. Kavanagh insists the dog does get time off.

She added, “She’s my baby. She doesn’t usually work more than three hours a day and she has toys and treats and we go for off-lead walks and I take my cane and she can play.

Guide Dogs UK, a charity for the blind and partially sighted, revealed figures that showed 71% of guide dog owners claim their dog is distracted by strangers at least once a day and 24% said it happens at least once a week.

They also polled the public, with results showing that 28% of respondents admitted they had stopped and distracted a guide dog while it was working, with a further 40% admitting they’d been tempted.

These distractions most commonly involve petting or touching.

But 9% of the public said they had even tried to feed a guide dog.

The charity released the data as a component of its ‘Don’t Dive on the Dog’ strategy, which strives to inspire people to treat guide dogs as they would other working professionals.