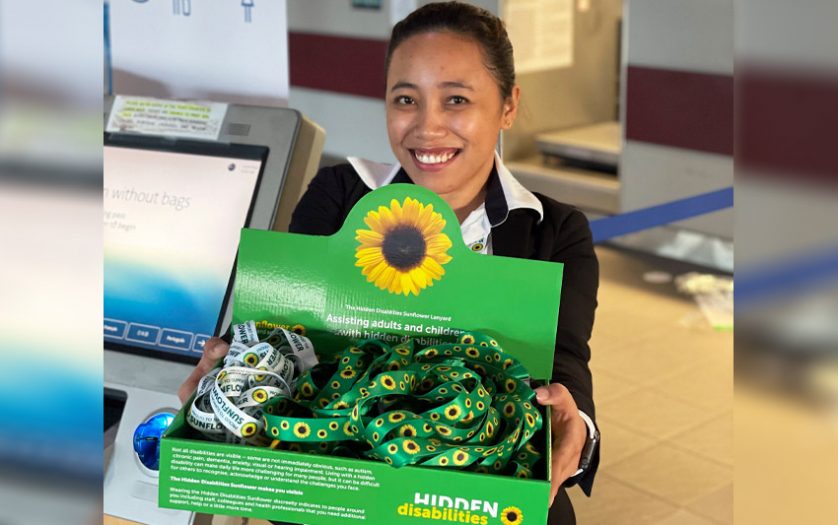 The travel journey at Melbourne Orlando International Airport (MLB) just got easier for passengers living with non-visible disabilities with the implementation of the Hidden Disabilities Sunflower program.

With the new program at MLB, various wearable products with a sunflower icon have been made available free of charge at every counter and key areas in the terminal, including airline ticket counters, rental car counters, the security checkpoint, and concessions. Wearing the Sunflower discreetly indicates to airport staff and the people around the individual or group that additional support, help or time may be needed.

“We all know travel can be stressful, and having a hidden disability can heighten that stress,” said MLB Executive Director Greg Donovan, A.A.E. “We’re delighted to be one of the first smaller airports in the nation to implement the Sunflower Program and create a more inclusive environment, giving everyone the opportunity to enjoy our airport’s uniquely calm experience.”

The Hidden Disabilities Sunflower program launched in 2016 in the UK and has now been adopted globally by major airport and venues, including supermarkets, railway stations, leisure facilities and first responder services.

“We are excited to partner with Melbourne Orlando International Airport on this growing initiative to offer the Hidden Disabilities Sunflower products in North America,” said Lynn Smith, CMO, The Sourcing Group. “This impactful program reaches so many people with non-visible disabilities throughout the world.”

More than 80 per cent of Australians with reduced mobility…

Agreement to improve public transportation for passengers with disabilities

The Justice Department entered into a settlement agreement with the…

Hospitality sector must do better in the area of accessibility awareness