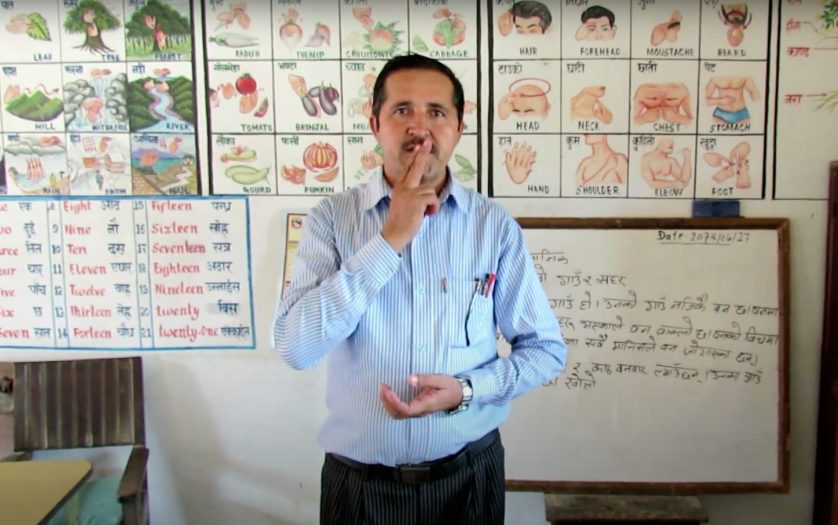 What makes Adhikari’s YouTube channel different from others on the platform is that his channel is specifically dedicated to teaching NSL, reported the Kathmandu Post.

He has uploaded a new video to his YouTube channel, “Nepali Sign Language,”every Saturday for the last five years, hoping to reach at least one person who wants to learn sign language. Adhikari’s son helps him with the technical aspect of making and uploading videos on the platform.

“Knowing that someone out there is watching my videos and learning sign languages makes me immensely happy,” said Adhikari.

Developed in 1998, NSL is used by people with hearing disabilities and sign language instructors in schools. For the Nepali deaf community, it’s the medium through which they communicate with people in their lives.

According to the National Federation of Deaf Nepal, there are 22 schools that teach sign language under special education programmes in Nepal. In communities that have no deaf schools, the government operates 174 ‘resource classes’, which focus on teaching sign language to groups of students.

Unfortunately, the quality of teaching in these schools is very poor, and many students with hearing disabilities enrolled at various educational institutions do not have the needed resources that make sign language easy to learn. In some schools dedicated to deaf students, the teachers don’t know sign language very well.

Adhikari has a hearing disability himself and has always been disappointed by the lack of appropriate instruction at schools for deaf students. He believes that the unequal and unfair social structures and the state not making sign language a priority have barred the deaf community from experiencing the same rights and privileges as the hearing population.

“For deaf people, there is neither the right resources nor a good inclusive educational system that can help the community members learn sign language,” he said.

And this is the reason that in 2016, Ahdikari decided to start his YouTube channel, as he found the platform more accessible to people.

“Five years ago, my son was involved in filmmaking, and he suggested that I start a YouTube channel to teach and help others to learn sign language. At first, I was unsure of how it would turn out to be and whether people will see my videos or not, but the kind of response that I have been getting makes me happy that I did the right thing by agreeing with his idea,” said Adhikari.

Giffgaff has launched a TV ad in British Sign Language…