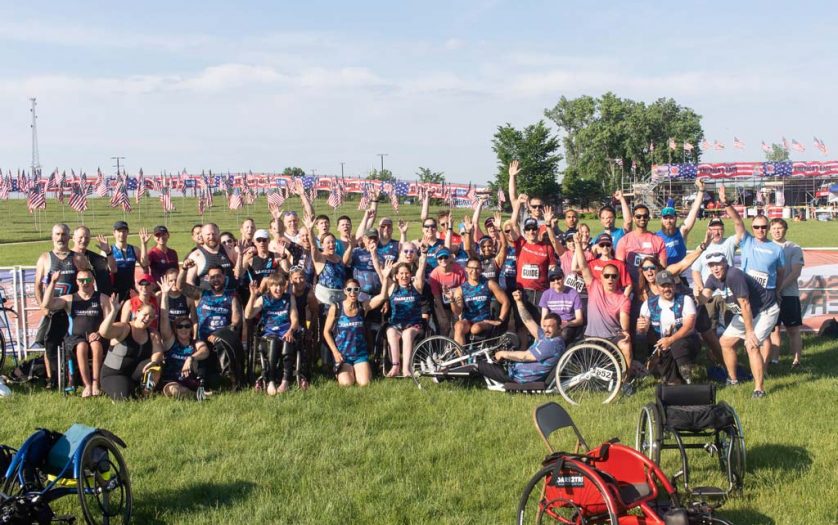 Pride, success, and a sense of accomplishment were emotions felt by athletes with disabilities at the finish line of the Leon’s Triathlon earlier this month.

Dare2tri, a Chicago-based sports and recreation nonprofit organization, concluded its Injured Military Camp with the Leon’s Triathlon — a swim, bike and run race that pays special tribute to active and retired military personnel.

In the days leading up to the Triathlon, veterans and active service members with disabilities such as amputation, spinal cord injury, stroke, traumatic brain injury, post-traumatic stress, and visual disabilities, trained at Dare2tri’s Injured Military Camp.

Everyone was welcome to participate in the Leon’s Triathlon — military or not, with or without a disability.

Owen Cravens, 17 years old with a vision disability, was the first athlete to cross the finish line in the paratriathalon, completing it with his guide Colin Riley in a time of 1:00:55.  Cravens began paratriathalon training at the Dare2tri’s Kids’ Camp five years ago and is now an elite athlete.

Lee Kuxhaus, an Air Force Veteran and lower limb amputee, described her experience participating in the triathlon as emotional and rewarding.

“When I came into T2, I didn’t know if I could do the 5k — I was in tears — total breakdown mode. Coach Shawna [Carter] was there with her no nonsense attitude telling me I could.  Now I know I can do it.  I did it.  I can do it again,” said Kuxhaus.

In 2016, Kuxhaus completed the Triathlon in a race wheelchair.  This time, she ran on a prosthetic running blade, finishing in 102nd place with a time of 02:46:54.

“I have been wanting to run for years…The run was hard — it turned more into a walk — but I was able to jog across the finish line in a blade for the first time since my amputation in 2013.  That feeling is not only incredible, but now there is this little spark inside me that wants to burn brighter,” she said.

Dare2tri was co-founded by Keri Serota and Melissa Stockwell in 2011 with the mission to empower people through adaptive sports.  Its goal is to develop a sense of community among athletes who aren’t characterized by physical activity but rather sheer determination and the desire to succeed.

For more information on all programs offered by Dare2tri, visit https://Dare2tri.org/programs