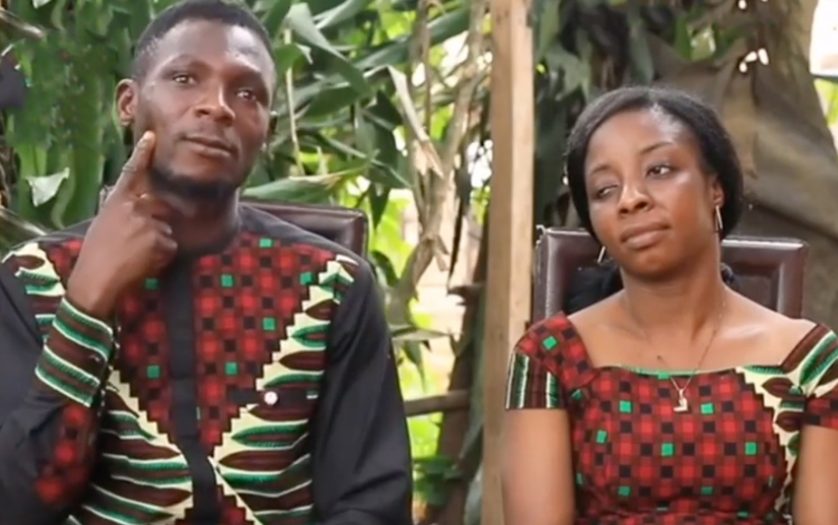 Kennedy and Tina, who both have hearing disabilities, are a married couple that don’t let the ignorance of others spoil their love.

In a recent interview with BBC News Pidgin, the couple told the story of how they met at church and Kennedy approached Tina, expressing his interest in beginning a relationship with the intent to marry.

When asked what each loves about the other, Kennedy, 30, said that his wife is a fantastic cook and does the laundry well. Tina, 27, said she loves her husband’s handsome looks and wonderful personality.

Although Tina is not fluent in sign language, Kennedy stressed that they communicate with each other in other ways and get along just fine.

Many Nigerians have been inspired by the duo’s love story:

Constance Nkpoli Iwegbu said, “Your marriage is blessed with the blessings of God which makes rich and adds no sorrows, in Jesus Name. Congratulations.”

Olateju Oluwo wrote, “Awesome! The greatest thing in marriage is love! Know if she can’t say it; she displays it! I wish you both the best of everything!”

Onwuka Comfort reacted, “I just fell out of my seat and landed on the ground just as I was watching this lovely couple’s story.”

TUKO.co.ke previously reported on the story of a young couple with hearing and intellectual disabilities who married in an emotional and beautiful ceremony.

One would have mistaken the blissful couple for any other lovebirds as they danced to the tune of the song being played.