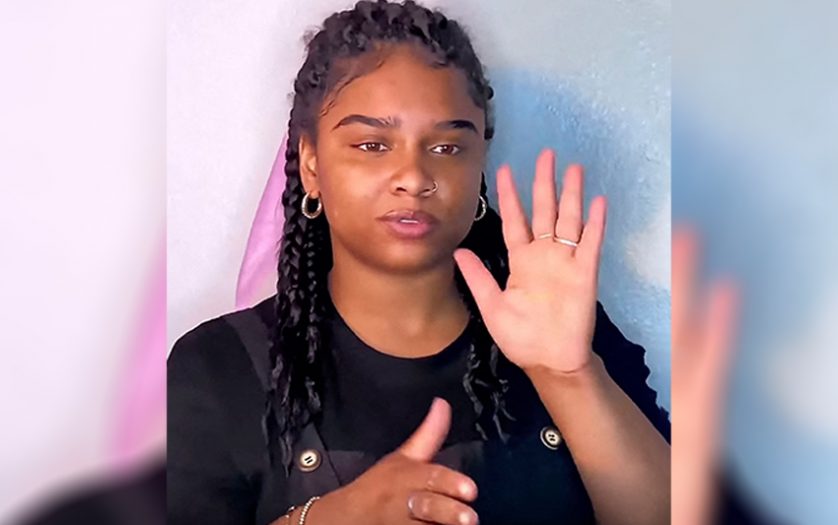 Nakia Smith, 22, an African-American woman who was born deaf, uses her following on TikTok to promote Black American Sign Language.

Despite growing up in Texas, Smith wrote on her TikTok account, “English is not my first language.”

In her video clips, Smith explained the differences between her language and the standard American Sign Language (ASL).

Some differences are that Smith signs with two hands rather than one, uses more space and makes more use of facial expressions.

Smith tells her 400,000 followers that to sign “paper” in ASL, a person imitates a sheet of paper by tapping the left hand with the right hand, while moving the latter outwards. In BASL, the person waves both thumbs outwards at shoulder level.

“Black ASL came from ASL, but has more seasoning. It’s more emotionally involved,” she told AFP, with her brother acting as interpreter.

“Growing up I learned to sign by watching older people in my family. Then when I went to school my friends didn’t understand what I was signing. I realized that BASL was unique and wanted to put it out there for people to learn it,” Smith said.

Carolyn McCaskill, professor at Gallaudet University in Washington, one of the largest institutions for the deaf and hard-of-hearing in the world, noted these differences between ASL and BASL decades ago.

Growing up in Alabama, McCaskill first learned sign language at a school for Black children with hearing disabilities, before going to a school for white children once segregation ended.

“The signing they used was so different, even though the schools were only 10 minutes away from each other,” she said.

The earliest schools for those with hearing disabilities in the United States date back to the early 1800s.  However, in 17 southern states and Washington, segregated schools for Black students were created towards the turn of the century. In these 18 schools, an unique way of communicating through signs developed from ASL.

These schools lasted for about 70 years, until desegregation, which was long enough to allow for a dialect with its own characteristics to materialize.

Momentous day in Israel as first deaf member of govt. sworn in by sign language

Shirly Pinto was sworn into government by sign language, becoming…