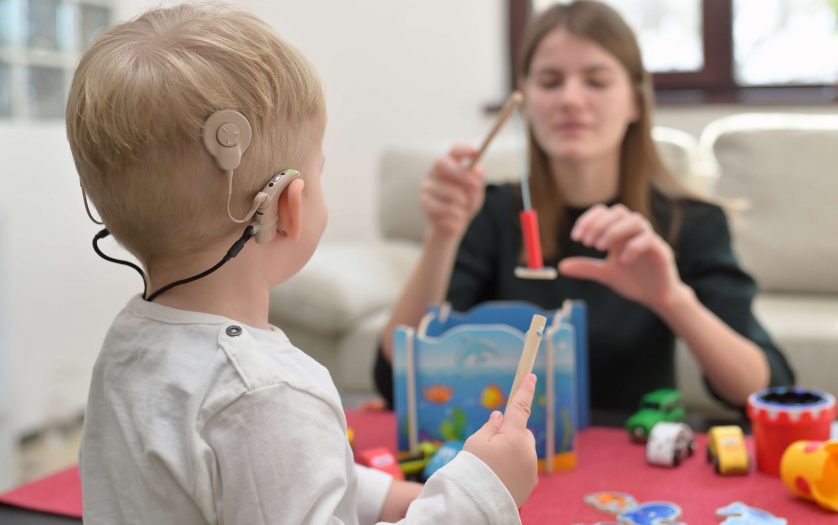 A Portland, Oregon couple has created a line of products designed to make life easier for children with hearing disabilities and their families.

Sean Wilkinson and Meghan Carey,  founders of Co-Amplify, came up with the idea from their life with 6-year-old son Percy, who has worn a cochlear hearing implant since age one.  Percy and his parents affectionately call the implant his “ears.”

“One of the missions to having the cochlear implants is to have them on as much, every waking minute, basically as often as possible,” Wilkinson said.

Percy’s parents soon realized the dilemma that so many parents of infants with hearing disabilities also encounter – hats made the implants detach.

“I went to put a hat on (Percy’s) head and his ‘ears’ would pop off, so we just set out to design a hat that would work,” Carey said.

That hat, handmade by a woman in Warren, is now selling across the country.  Carey said she designed it specifically for infants and toddlers who are too young to tell parents that their “ears” have popped off.

“It’s structured like a warm, cozy hat, but there’s a pocket that I can slide the cochlear implant processor and the headpiece right into that pocket, so it keeps him warm and cozy,” Carey said.

Co-Amplify has added a second product; a wooden puzzle-like game based on the renowned Ling Six Sound Check, which helps determine if a cochlear implant is working effectively.

“We figured if somebody else could benefit from this, it was probably worth pursuing,” Wilkinson said.

The duo are also working on more new products.  Their company will soon be unveiling a new “summer sun hat” as well as a design for helmets.

“My husband and I are both designers and we felt like we had connections and skillsets that other parents in our position might not, so we felt like we wanted to help those parents solve the problem too,” Carey said.