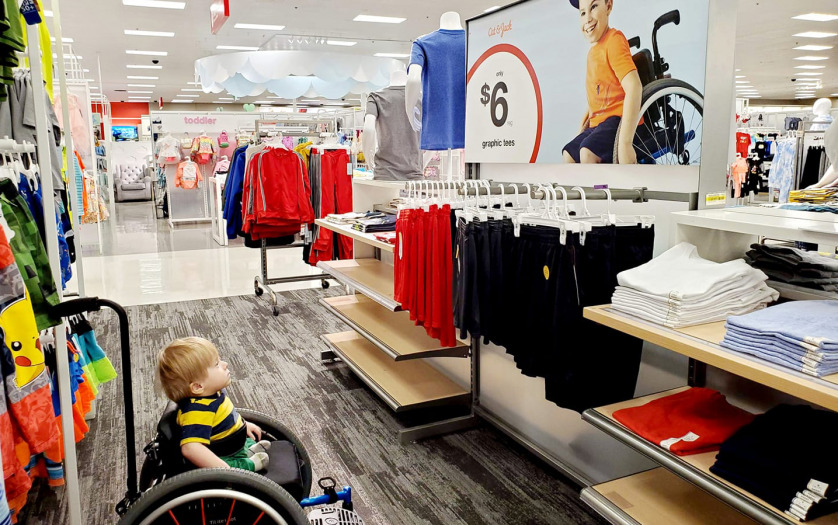 Target is earning praise for featuring a kid in a wheelchair in an advertisement. Oliver Garza Pena, who is 2 years old, was shopping with his mother this week when he noticed a clothing sign featuring a model in a wheelchair, reports Fox6now.

“He turned back around to see this picture that he spotted,” the post on Ollie’s World Facebook page says. “He just stared at it in awe!”

Pena has a condition called Caudal Regression Syndrome (Sacral Agenesis), a rare condition that affects development of the lower spine. It’s estimated that 1 to 2.5 in every 100,000 newborns is born with this condition. It occurs when the lower spine doesn’t fully form before birth. The lower spine is a part of the “caudal” half. This area contains the parts of the spine and bones that form the hips, legs, tailbone, and several important organs in the lower body.

“It was just a beautiful moment to see — him admiring somebody like him — because he doesn’t get to see that often,” Demi Garza-Pena, Oliver’s mom.

“To see that kind of backing, and see that support, not only for Ollie but just the things Target’s been doing..” said Luca Bakemeier, Target store director.

When thinking about the term ‘role model’, look to Kate…

The launch of a new clothing line, called Social Surge,…

University student’s own experience with disability inspired an inclusive clothing

Gemma Tyte’s own experience of living with cerebral palsy is…