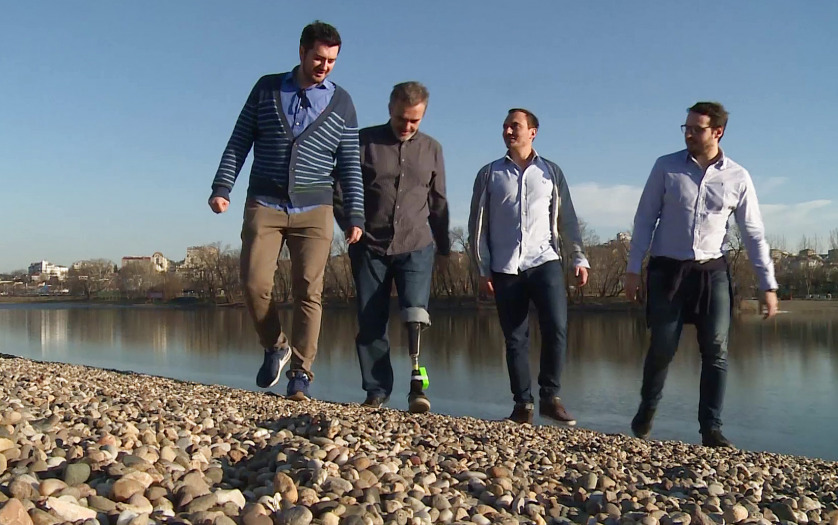 A team led by Swiss institutions has developed bionic legs that allow amputees walk freely while thinking about different activities other than controlling the device.

The study were published in the journal Science Translational Medicine showed that tiny electrodes implanted in the patients’ thigh nerve give them natural sensations of touching the ground with the foot.

Djurica Resanovic, one of the volunteers, says, “The first time that I felt my leg, my foot, it was very interesting, like my own leg, after several years.” Wearing a blindfold and earplugs, Resanovic could tell where the foot was being touched, or how much the knee was flexed. “I recognized when they touched thumb, heel or foot, anywhere else.”

A sensorized insole is placed under the prosthetic foot. The signals from the insole and prosthetic knee sensors are translated in impulses of current, the language of the human nervous system, which are delivered to the residual peripheral nerve through tiny electrodes implanted transversally into the nerve itself. Then, the signals from the residual nerves are conveyed to the brain, which is able to perceive what happens at the prosthesis and to adjust the walking accordingly. The machine and the body are connected. Regaining limb awareness allows the subjects to feel obstacles underfoot and to avoid falls.

“We developed the first leg with feelings for highly disabled, above-knee amputees, which enabled them to surpass unexpected obstacles without falling, or to climb stairs much faster. These two tasks are extremely difficult, if even possible, for amputees wearing commercial prostheses,” said Stanisa Raspopovic, professor at ETH Zurich.