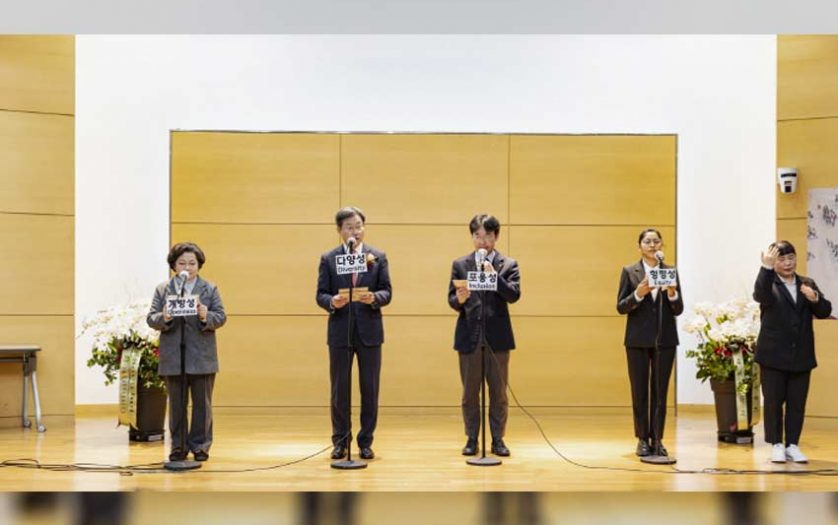 Korea University held the first Korea University Diversity Awards Ceremony on December 20 at the Centennial Memorial Samsung Hall after announcing the Diversity Declaration that states its commitment to creating an environment where everyone is respected and can grow. In addition, the university revealed a specific plan to implement it, showing its will to further develop creative talents for a future with greater diversity.

The Korea University Diversity Declaration was read together by President Chung Jin Taek and three representatives of the university at large to demonstrate the will of the university and its members to implement the declaration. The three representatives were No Jeong-min, an administrative officer in the Center for Human Rights & Gender Equality, Kim Sang-ho, a professor in the Division of Global Sport Studies, and Marcela Molo Flores, an undergraduate in the Department of Mechanical Engineering.

President Chung explained the background and meaning of the Korea University Diversity Declaration. He said that diversity is today an essential competency for people of different backgrounds to live in harmony and a driving force for growth that will lead to a sustainable future. Since the establishment of its Diversity Committee in 2019, Korea University has been striving to share the values of diversity: openness, inclusion, and equity. He went on to say that he would do his best to help various KU members share different perspectives and experiences and to grow into innovative and creative talents.

The three representatives presented the university’s action plan according to the three values, No Jeong-min declared that Korea University will improve its admissions, appointment, and recruitment systems and establish an open communication system in a way that allows more diverse members to work together in all fields, including education, research, and administration. Professor Kim Sang-ho announced that Korea University will not allow any form of discrimination in terms of exclusion and will firmly respond to hate speech so that differences do not evolve into discrimination. Marcela Molo Flores declared that, in terms of equity, Korea University will remove barriers that hinder the participation of certain individuals or organizations so that everyone at the university can receive fair treatment. Last, President Chung and the three representatives pledged with one voice that all KU members would continue to make efforts to promote diversity.

Following the announcement of the Diversity Declaration, the first Korea University Diversity Awards Ceremony was held. This year’s recipients of the awards are Mohae (KU supporters of Center for Students with Disabilities), Korea University’s School of Media & Communication, and Professor Lee Jong-koo of the Human Inspired AI Research Institute. They were nominated by recommendation and were chosen after a document screening and then a second screening by internal and external judging panels.

As a result of continuous efforts to increase faculty diversity, 47% of Korea University’s School of Media & Communication faculty are women, 70.6% are non-Korea University graduates, and 23.5% hold doctoral degrees in fields other than media studies. Unsurprisingly, the school ranked first among Korea University colleges/divisions in the Diversity Council’s Faculty Diversity Index (KUDI-I) and won the Excellence Award at the first Media Diversity Awards held by the Korean Society for Journalism & Communication Studies in October 2022. In addition to establishing diversity in the curriculum and actively educating students on the value of diversity, it created a scholarship fund to promote equity.

Professor Lee Jong-koo of the Human Inspired AI Research Institute has spread educational diversity and inclusion management through the development and operation of the KMOOC (Korean Massive Open Online Course) general course “Diversity Strategy for Innovation Management,” the KMOOC specialized course “Diversity and Coexistence, and Business Cases,” and the Hunet CEO course “Innovation Management Leading to Diversity.” He has been praised for his research efforts involving the spread of diversity and inclusive management through the publication of several papers and books on diversity.

At the awards ceremony, Professor Choi Jae-cheon of the Biodiversity Foundation gave a congratulatory speech, highly appreciating Korea University’s will to realize diversity and expressing expectations for the success of its future changes. A performance by the Heart-Heart Brass Ensemble, an orchestra for people with developmental disabilities founded in 2006, added meaning to the awards ceremony. The Heart-Heart Brass Ensemble, composed entirely of brass instruments, is loved by the public mainly by playing cheerful and popular music.