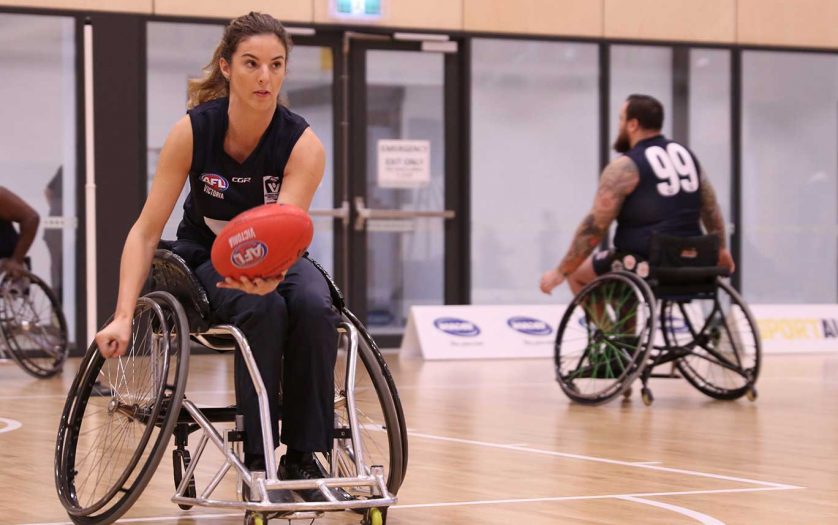 Disability Sports Australia (DSA) is today pleased to announce a partnership with the Victorian Government through its Significant Sporting Events Program to support the upcoming 2022 Toyota Wheelchair AFL National Championships.

Delivered by DSA in partnership with the Australian Football League (AFL), the National Championship provides an opportunity for people with a physical disability, and those without disability, to participate together.

Wheelchair AFL is a modified, all-inclusive game of Australian Rules Football which is played in a sports wheelchair.

The Game is played between two teams of five, plus interchange players, on a rectangular indoor court divided into thirds with portable goal posts at either end of the field. Scoring is identical to traditional AFL: six points for a goal, one point for a behind.

This announcement continues the momentum the sport of Wheelchair AFL has been recently generating with the National Championship returning after an almost three-year pandemic hiatus.

The event will be hosted at the newly re-opened, state-of-the-art Diamond Valley Sports and Fitness Centre in Greensborough, managed by Aligned Leisure.

Kayo Sports will be streaming all Division 1 matches of the competition from Wednesday 23rd November and the Finals series of both Divisions on Friday, 25th November.

Matches will be streamed free via Kayo Freebies, with fans able to access the coverage via the Kayo Sports app or online www.kayosports.com.au/freebies. Kayo Freebies are free with no

The 2022 Toyota Wheelchair AFL National Championship is a free ticketed event that will be open to the public to watch and support.

Stay up to date with the competition at the official event website: