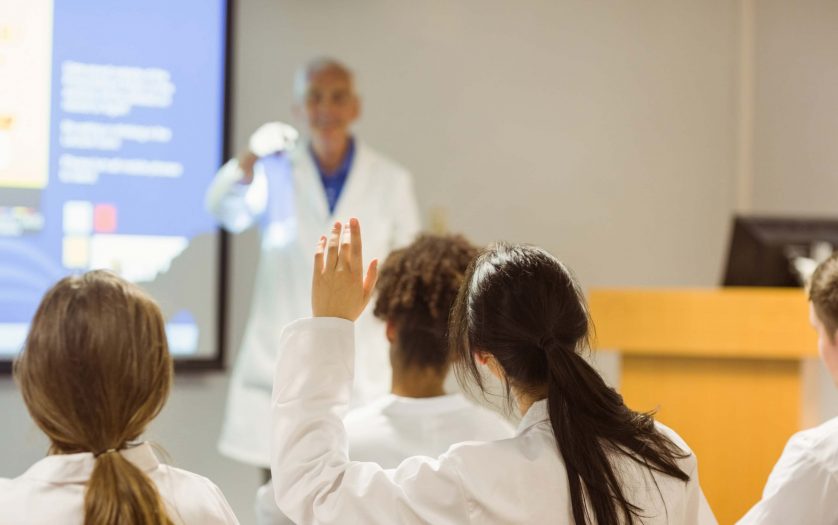 Diversity in the biomedical workforce leads to more research innovation, higher quality work, and more participation in clinical trials by people in underrepresented racial and ethnic groups. But within this workforce, inequities in representation persist.

In two new studies, Yale investigators examined factors that can shape biomedical career paths — research experiences, publications, and funding rates — among medical students in the United States. They found disparities across race, ethnicity, and sex that may contribute to underrepresentation in the field.

Both studies were published in JAMA Network Open.

In the first study, published Oct. 25, the research team analyzed research experiences and the number and frequency of publications among medical school graduates who matriculated in the field during the academic years 2014 to 2015 and 2015 to 2016.

“The number of research experiences that students reported having were similar between men and women; women had a slightly higher number of research experiences than men,” said Mytien Nguyen, an M.D.-Ph.D. student at Yale School of Medicine and lead author of both studies. “And the disparities were very small or non-existent between non-minority groups and groups underrepresented in medicine. However, when we looked at the number of publications, we saw there were marked disparities.”

On average, women had 10% fewer publications than men. Black and Hispanic students had 15% and 7% fewer publications, respectively, than their white peers. And women in underrepresented groups had the lowest publication rates, which were 20% lower than those of white men.

The differences in publication rates could be due to a number of factors, the authors said. But previous studies have shown that women and underrepresented students are less likely than their peers to work with productive mentors with large research networks. Research has also shown that mentors often provide less support to underrepresented mentees until they’ve achieved some academic success.

The impact is long-lasting.

“There have been several studies showing that medical students who have positive research experiences, and especially if they have some type of publication, are significantly more likely to both pursue a career in academics and obtain federal NIH funding,” said senior author Dowin Boatright, who conducted the research while at Yale School of Medicine and is now the vice chair of research in the Department of Emergency Medicine at New York University Grossman School of Medicine. “So there’s evidence showing that these experiences can be transformational.”

And, notes Nguyen, these experiences provide essential training. They allow students to develop skills they’ll need for independent research, such as how to communicate their research, how to be critical about their analyses and hypotheses, and how to work with study editors and reviewers. They also serve as credentials when students seek research positions or funding later in their careers.

In the second study, published on Oct. 26, the research team specifically investigated one type of predoctoral fellowship funded by the NIH. That fellowship is awarded in two categories: one open to all students, and one available to students who identify as Black, Hispanic, American Indian, or Alaska Native, have a disability, or are from a socioeconomically disadvantaged background.

Further, when comparing the growth rates of these two categories, or how many additional awards were given each year, the researchers found that the diversity category’s rate was 89% lower than the general category between 2001 and 2020. In fact, the number of new diversity fellowships remained stagnant from 2010 onward.

The researchers did not have data on the numbers of applicants for the awards or the personal information of applicants, so they could not rule out that underrepresented students were applying for the general rather than the diversity awards.

Boatright thinks that is unlikely, but even if it is the case, it’s not a reason to limit funding for the diversity grant, he said. “Either way, it’s a missed opportunity to further increase the diversity of the workforce,” said Boatright, who suggests more transparency from funding agencies could prevent these sorts of disparities from developing.

Boatright and his research team have uncovered sex- and race-related disparities across many aspects of medical school, including honor society membership, experiences of mistreatment, attrition, and residency placement. “We’re finding disparities anywhere we look where there’s a valued and limited resource that could truly change the course of someone’s career,” he said.

These disparities demand systems-level change, he said. And he points to the success that has been achieved in boosting equity in medical school admissions, much of which can be attributed to diversity requirements instituted by medical school accreditation bodies.

“What regulatory bodies and funding bodies can do is put more pressure on institutions to demonstrate equity,” said Boatright. “Require them to investigate whether disparities exist and develop plans to address them.”

Early childhood teachers (ECTs) in NSW working with children with…