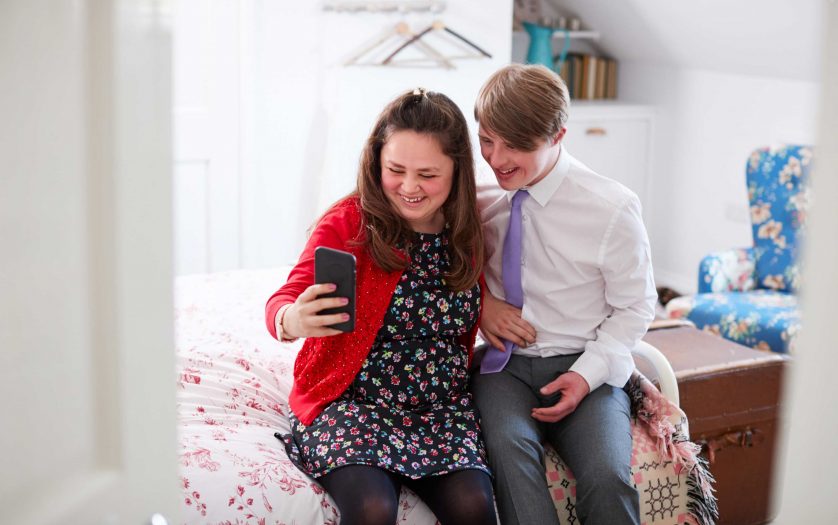 People with neurodevelopmental disabilities, including autism, usually want to have romantic relationships, but are often not given the tools to create them in a meaningful, safe way. This is particularly true for those with intellectual disabilities.

A pilot study of the effectiveness of Relationships Decoded, published recently in the journal Sexuality and Disability, suggests that a curriculum using evidence-based practices can improve individuals’ knowledge and preparation for romantic relationships. This information is also key in preventing sexual abuse.

“People with all types of disabilities are targets of abuse at higher rates than people without disabilities,” said Kathryn Pedgrift, clinical psychologist with the North Bay Regional Center and co-author of the study. She was previously a special education teacher who specialized in abuse prevention and relationship development. “I found that once people are interested in a relationship and put themselves out there, maybe looking online or dressing up to attract a partner, this put people with neurodevelopmental disabilities at a higher risk of being targeted by predators.”

An investigation by NPR found that people with intellectual disabilities are the victims of sexual assault at a rate seven times higher than those without disabilities.

One reason for this is a lack of knowledge and education about sex and sexual abuse among these individuals.

“I just couldn’t believe that we could allow human beings to get into adolescence without any knowledge or tools about how to even be in a relationship romantically and safely,” said Nicole Sparapani, associate professor in the UC Davis School of Education, MIND Institute faculty member and study co-author. “I found study after study saying that people with neurodevelopmental disabilities often don’t have access to learn about social-sexual relationships in any real capacity.”

Pedgrift notes that many of these individuals have never been in a sex education class or been given information about typical relationships or signs of abuse. “Even those who have had sex ed, it’s a science course, and doesn’t address the social part of sex and relationships, which is critical for those with neurodevelopmental disabilities,” she explained.

Human connection is really foundational for folks, so we shouldn’t be isolating people because they have a disability; they should have access to knowledge like anyone else.” —Nicole Sparapani, associate professor, UC Davis School of Education

Between 2017 and 2020, Pedgrift and a team of providers developed a curriculumdesigned to teach adults with neurodevelopmental disabilities to create safe and meaningful relationships while also giving them information about sexual abuse and coercion. Funding was provided through the California Mental Health Services Act in partnership with the state’s Department of Developmental Services. A panel of people with disabilities provided feedback. The vast majority – 82% – of the 46 individuals in the panel expressed an interest in dating, while 40% said they’d never learned about relationships or dating.

Pedgrift created 25 core lessons that support the use of evidence-based practices. She included both beginner and advanced programs and called it Relationships Decoded. Each lesson included plans for facilitators to follow, with sample scripts and visual supports like photos or videos for learners.

To pilot test the program, 10 diverse professionals from California were recruited, including teachers, therapists, and behavior analysts. They administered the teaching program to adults with neurodevelopmental disabilities for one year. The researchers also conducted pre- and post-tests that some participants took before and after taking part in the program.

To evaluate the curriculum’s success, Sparapani and Pedgrift analyzed feedback collected during testing, the pre- and post-tests and interviewed the pilot testers.

Learners who took part in the Relationships Decoded program scored significantly better on the post-test than the pre-test, indicating that the lessons were effective in increasing knowledge and understanding of social-sexual relationships. Scores improved from pre- to post-test by 22%.

Sometimes individuals with intellectual disabilities display social-sexual behavior that is offensive to others. This can have major consequences.

“They may miss out on jobs, housing and meaningful relationships,” Sparapani explained. “This is another area where a curriculum like this can make a huge difference.”

“Often people are only getting this sort of training in response to their unexpected behaviors in the community or to sexual assault; they are referred for this education in response to something rather than proactively,” she explained.

The researchers’ next goal is to create a program for middle school and high school students, as the current program is geared toward adults.

“Human connection is really foundational for folks, so we shouldn’t be isolating people because they have a disability; they should have access to knowledge like anyone else,” Sparapani said. “My biggest hope is that we’ll really start to see all people as humans first and then create equitable opportunities to lean about sexual relationships.”

The Relationships Decoded curriculum is available here, free of charge to providers, parents or anyone who is interested.

The UC Davis MIND Institute in Sacramento, Calif. was founded in 1998 as a unique interdisciplinary research center where families, community leaders, researchers, clinicians and volunteers work together toward a common goal: researching causes, treatments and potential prevention of challenges associated with neurodevelopmental disabilities. The institute has major research efforts in autism, fragile X syndrome, chromosome 22q11.2 deletion syndrome, attention-deficit/hyperactivity disorder (ADHD) and Down syndrome. More information about the institute and its Distinguished Lecturer Series, including previous presentations in this series, is available on the Web at mindinstitute.ucdavis.edu.