Virginia Tech researchers study the connection between dance and autism 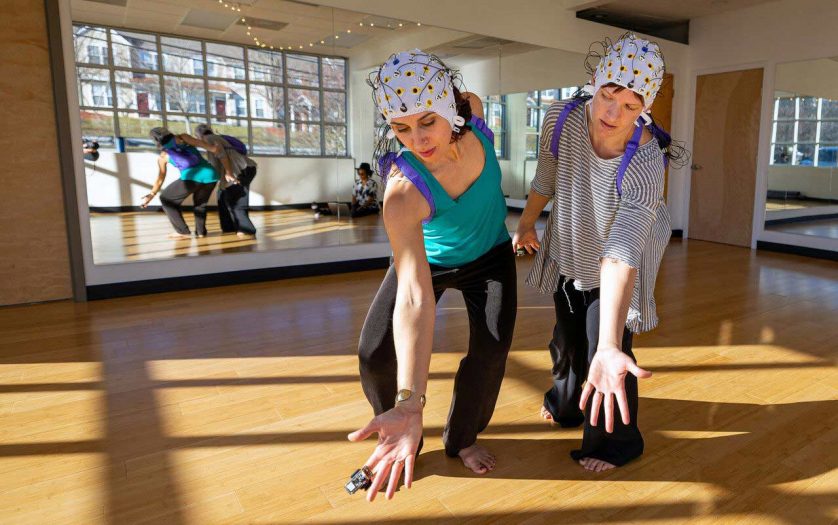 Julia Basso (left) and Rachel Rugh test their electroencephalography caps before starting a research project that studies how dance can affect those with autism spectrum disorder. Photo : Ray Meese for Virginia Tech.

Julia Basso, the director of the Embodied Brain Lab at Virginia Tech, readily admits that few college students choose to double major in the unlikely tandem of dance and neuroscience.

But sort of like the pairing of cheddar cheese and apple pie, the intriguing combination works, and Basso is putting her education and past research to the test in hopes of benefitting people with autism spectrum disorder. Autism refers to a broad range of conditions characterized by challenges with social skills, repetitive behaviors, speech, and nonverbal communication.

Basso, an assistant professor in the Department of Human Nutrition, Foods, and Exercise in Virginia Tech’s College of Agriculture and Life Sciences, is teaming with Rachel Rugh, an adjunct faculty member at Virginia Tech and the owner of the local dance studio New River Moving Arts, to begin recruiting people for a study on how dance affects those with autism spectrum disorder.

“One of the symptoms of this disorder comes in social skills, such as the inability to look others in the eye, read emotional expressions, engage with others, and utilize mirroring,” Basso said. “So there’s a big connection with what we’re training for in dance and the difficulties we see in this disorder.”

Basso, along with Medha Satyal, a former Virginia Tech Ph.D. student in translational biology, medicine and health, and Rugh, collaborated on a paper called “Dance on the Brain: Enhancing Intra- and Inter-Brain Synchrony.” The paper, published last year in the National Library of Medicine and other publications, served as a composition of their observations and research on parallels between dance and the brain.

The paper revealed their hypothesis, called the Synchronicity Hypothesis of Dance. First, though, they redefined dance from traditionally held views, laying out what it really is and really does.

“I think a lot of people think of dance as moving your body and feeling good, which is certainly valid. You get out on the dance floor and you’re moving and in the flow and it’s awesome. But the type of dance that Julia and I are more interested in studying is a little more formal and based in the world of somatics,” using the mind-body connection to survey one’s internal self and listen to signals that one’s body sends about areas of pain, discomfort, and imbalance, Rugh said.

“It’s the idea of composing, choreographing, looking at patterns of movement, training your eye to see what you find aesthetically interesting in the moment, then doing body scans as you move, watching other dancers, and then mirroring their movements. Trying to create moments of synchrony.”

The paper hypothesizes that dance enhances “neural synchrony” in the brain region supporting various neural behaviors. In simpler terms, when people dance and engage with others, the two brains become synchronized.

They hypothesize that dancing enhances intra-synchrony within one’s own brain and inter-synchrony, or the synchrony between two brains. Scientists possess the ability to measure brain activity between two individuals through a technique called hyper-scanning, a termed coined by Read Montague at the Fralin Biomedical Research Institute at Virginia Tech Carilion, who is involved in this type of research.

“We’ll be able to record the brains of two individuals and how they interact, especially through these dance practices as we mirror one another,” Basso said. “We’re examining body and brain physiology of two individuals as they’re moving together and generating movement patterns spontaneously. We’re really excited about that.”

The professional strengths of both Basso and Rugh fit perfectly with this study. Basso graduated with undergraduate degrees in neuroscience and dance from Middlebury College and later added a Ph.D. in behavioral and neural science from Rutgers. She has been researching the effects of exercise on brain function and physiology for more than a decade and figures to handle the science part of this study.

To develop the dance curriculum, Basso and Rugh, who holds an undergraduate degree in dance from the University of North Carolina Greensboro and a Master of Fine Arts in dance from the University of Wisconsin-Milwaukee, have been consulting with certified dance/movement therapists and a team of dance and somatics experts. Additionally, Basso has been consulting with world-renowned autism researcher Kevin Pelphry at the University of Virginia. This project is currently funded by the  Integrated Translational Health Research Institute of Virginia (iTHRIV).

“We’re going to focus on a different dance element or concept every week and dive more deeply into that,” Rugh said. “The dancers will have a set warm-up every week because we want to have some things that are familiar and comforting. The plan is to have people partner up and do partner improvisation activities.

“It’s fun and quick, but also has clear parameters and rules. We’ll do group activities and some kind of cool down. That’s the structure for each class during the four-week session. Ultimately what we’re going to try and do is build toward some very informal share-out. By the end of it, hopefully the group members will be able to share movement or scores [movement sequences], so they’ll be creating their own and then performing them for each other.”

Rugh brings the added knowledge of having worked with autistic children while as a preschool teacher in Seattle. She looks forward to learning more about the needs of the adult population.

While in that role, Rugh became interested in sensory integration, a term used to describe processes in the brain that allow people to take information from the five senses, organize it, and respond appropriately.

“There is a very well-known and well-respected dance educator in the Seattle area named Anne Green Gilbert, and a lot of her work has investigated sensory integration through dance,” Rugh said. “She does a lot of integrated curricula with children and adults with disabilities and neurotypical individuals. She examines how specific movement patterns and exercises can integrate the senses. People can feel calmer, more grounded, more able to focus, and more integrated between brain and body. I’ve always been interested in her work. I took a workshop with her, and it deepened my interest.”

What is the end game with this study? How will this research potentially benefit those with autism spectrum disorder?

People with autism tend to lack social skills. They avoid eye contact, prefer solitude, and in many cases, feel isolated. Often, they struggle to understand other people’s feelings.

Basso hypothesizes that dance will stimulate those social elements of the brain and that individuals with autism spectrum disorder will feel connected with someone who shares their movements and behaviors, helping to understand their thoughts and feelings.

“If you and I did a practice of moving our finger together, our sensory-motor cortices, what we’re feeling in the brain regions that map out the human body, we would expect those brain states to be in tune with one another,” she said. “But we’re also hypothesizing because of the training in dance and this link between sensory, motor, social, and emotional aspects of dance, that as we train in dance and cultivate these states with our partner, we’ll be able to see enhancement of the social elements of the brain.

“We think you’ll see behaviorally that, when you start to connect at the somatosensory-motor level, that the partners start to tune into each other’s empathy. It’s this idea of ‘Theory of Mind’ and connecting with one another physically through eye contact and touch. … The physical processes can transform into emotional connections as well. This is a process that begins to happen really early in development through the connection between parent and infant.”

Basso and Rugh currently seek individuals 18 years and older and at level 1 among those with autism spectrum disorder to participate in the project. They plan to hold sessions at New River Moving Arts, Rugh’s dance school and the new site of The Embodied Brain Laboratory located on North Main Street in Blacksburg.

Eventually, they hope to bring or cultivate an arts and science hub at Virginia Tech that further focuses on mind-body research, a place that could be a resource for the community in addition to being a scientific endeavor. They are currently applying for a National Endowment of the Arts Research Labs grant for this exact purpose.

“There are so many ways that we can bring in arts-based research on a quantitative and qualitative level that would have meaning for us as artists,” Rugh said. “We really want to create choreographic work and then examine what’s happening between the performers themselves, as well as between the performers and the audience.”

But in the short term, they’re excited about the possibilities and potential outcomes of this project.

“We’ve been running studies on neurotypical individuals, especially during the pandemic when there is all this social isolation going on,” Basso said. “So, our preliminary studies have shown that even one single session of dance can enhance positive feelings and decrease negative ones, as well as enhance social togetherness and feelings of social connectedness. No matter who you are, you can benefit.”