Book explores the intersection of slavery and disability in U.S. 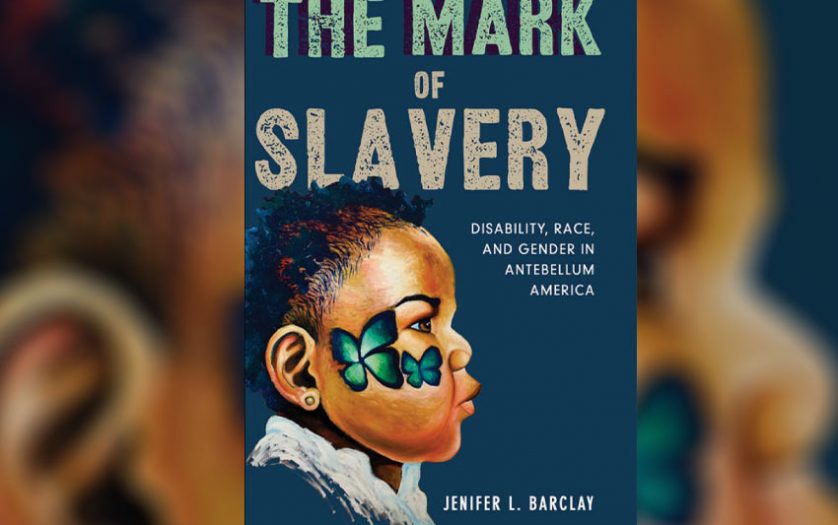 Many enslaved people with disabilities in antebellum America, deemed unfit for labor by their owners, played critical social roles and provided a measure of stability to the vulnerable communities in which they were held, according to a recently published book by a University at Buffalo historian.

Until now, the historical narrative has been largely silent about these valuable contributions and the people who made them. With the publication of “The Mark of Slavery: Disability, Race, and Gender in Antebellum America,” Jenifer Barclay, PhD, an assistant professor of history in the UB College of Arts and Science, has writtenan important addition to the literature on African American history and the history of slavery in the U.S. that provides new perspectives of understanding.

“My work uses disability as a lens for closely examining the nature of people’s everyday lives under the institution of slavery,” says Barclay. “But the book also addresses the ways in which disparaging beliefs about disability were linked to ideas about Blackness, revealing the deep historical connection between racism and ableism.”

Some form of disability affected about 10% of America’s enslaved population, and since slaveholders determined value by a person’s perceived ability to labor, physical, sensory, and other impairments devalued enslaved people in the eyes of their owners. As Frederick Douglass said ─ describing an enslaved woman who lost the use of her hands in a fire when she was a child ─ slaveholders often saw enslaved people with disabilities as able to do “very little but bear heavy burdens.”

The potential separation of families was a constant fear in slave communities. But enslaved people with disabilities were less likely to be sold and remained stationary figures within communities. Largely ignored by slaveholders, they took advantage of this autonomy and became caregivers, healers and keepers of memory.

“These men and women usually did important community- and family-centered work like caring for children while their parents worked, nursing those in need of care, cooking, making clothes and shoes, maintaining slave quarters, tending provisional gardens that were important food sources, and many other things,” says Barclay.

“They were central figures in slave communities who provided a critical sense of continuity and social cohesion, serving as bulwarks against some of the most dehumanizing and volatile aspects of slavery.”

One story Barclay uncovered from the “WPA Slave Narratives Collection” was told by a man who was enslaved as a child. He remembered that his father was not seen as a valuable laborer because of a physical impairment, but every day he carried infants from the slave quarters to the fields where their mothers worked so the children could be nursed.

She says it’s among the most poignant examples uncovered in her research for the book.

“At the very least, these mothers were able to see their children and hold their children, all because of the service this man provided,” she says.
But it wasn’t just adults with disabilities who filled these roles. Enslaved people of all ages made essential contributions, including older children, unable to work, who often cared for other children too young to work.

“These are such powerful forms of community-based work, which was invaluable to enslaved mothers and their children. It was about nourishment and nurturing,” says Barclay.

That Barclay is able to find these voices and bring them to life in her book results from her reading traditional sources “against the grain.”

She says there aren’t many sources available to scholars researching the institution of slavery from the perspective of enslaved people. The WPA collection is one source.

Fugitive slave narratives also serve as primary sources, but concentrating the research on disability narrows the field even further. Well-known sources, however,
provided Barclay with surprises.

“The esteemed Frederick Douglass shares stories of disability in his widely read autobiographical writings, but no one had really read his work with an eye toward disability,” says Barclay. “He even shares personal stories about his grandmother who experienced disabilities as she grew older. He was furious at the way she was ‘turned out to die,’ as he put it, by a slaveholder who no longer saw her as valuable enough to care for despite the wealth she had brought the family through her lifetime of forced labor and the children she had borne.”

Barclay also read through decades of antebellum medical journals, some of which provided case studies of enslaved people with disabilities with clinical language that described specific conditions and treatments, but also contains hints for how people were experiencing life.

“These were powerful sources,” she says. “They helped me shine a light on the daily lives of enslaved people with disabilities, but they also provided me an opportunity to examine the complex relationship between race and disability in nineteenth century American culture.”