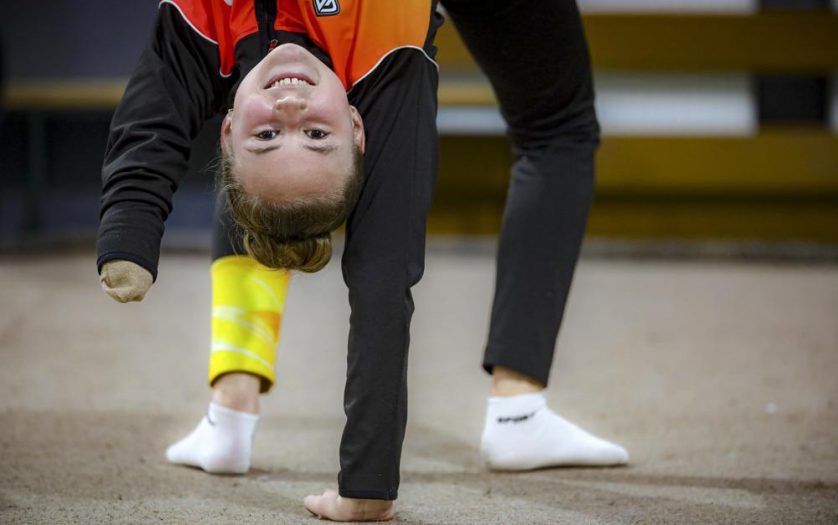 Despite the discrimination faced by Bosnians with disabilities, Sara Becarevic never thought she couldn’t succeed at her dream of becoming a gymnast.

Sara was born without a lower left arm in Bosnia, a poor Balkan country known for the large-scale social and economic exclusion of people with disabilities.

Having been obsessed with rhythmic gymnastics since she was a toddler, now, at almost 14 years of age, Becarevic is winning medals for her club, Visoko, named after the small Bosnian city where she was born.

“Some people said that it was impossible, that I couldn’t do it, but I can,” Sara told Banner News.

“I don’t care about what others say, my own sense of what I can achieve is the only thing that matters.”

Rhythmic nor artistic gymnastics are featured in the Paralympics, so Sara has no option but to compete against able-bodied athletes. Using her right arm and the remaining part of her left arm, she handles the equipment gracefully, turning cartwheels easily, despite her disability.

Sara’s mother, Sanela, was “worried about how she would be accepted” when she decided to enrol her daughter, aged 9, at the Visoko rhythmic gymnastics club. But they “had the good fortune” to encounter an open-minded, young coach, Amina Lepic-Mlivic.

Bosnia is a country where, according to the U.N. children’s agency, UNICEF, “children with disabilities and their families still face discrimination, their rights are often not fully met and they still face limited access to basic services.”

“At first, it was unusual, I won’t say difficult, just unusual, because it was a new experience for me as well. As we were getting acquainted, we were learning from one another,” Lepic-Milavic recalled.

The coach soon realized that Sara was different, “but what made her different was her unique resolve, dedication to practice” and talent.

Sara has won medals from numerous national and international rhythmic gymnastics tournaments – but says this is just the beginning.

“I thought it would be difficult, but when you practice hard and try even harder, it becomes easy,” she said.

“My ultimate goal is to compete in the World Championships and the Olympics, to compete with the best (rhythmic) gymnasts” in the world, she added.

Lepic-Milavic said she has unending confidence faith in Sara, but is less confident that the young athlete will ever receive the support she deserves in Bosnia.

Although the Visoko club was founded by the city and competes internationally under the Bosnian flag, its apparatus, uniforms and travel expenses are typically bought by its members — or rather their parents.

Nevertheless, she quickly added: “I really do have faith in this girl, in Sara, and I am proud that she chose me to be her coach. … I believe that she is capable of one day entering the European or World Championships.”