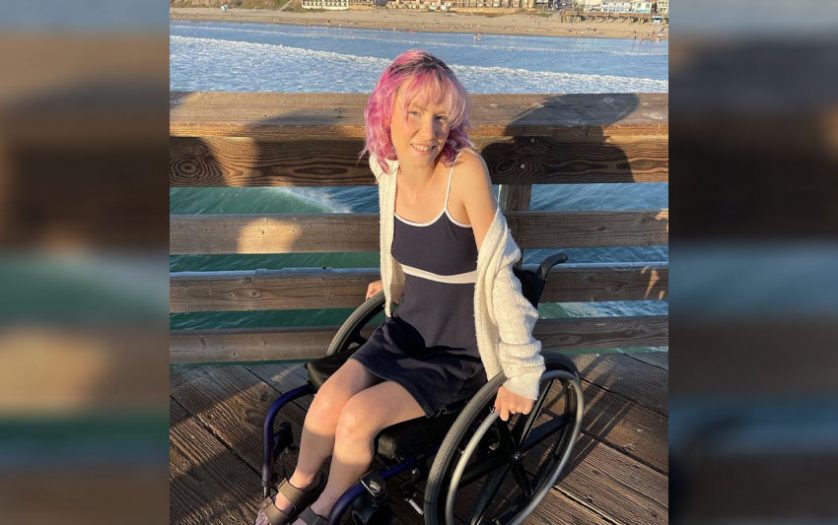 “The first wheelchair I was given was quite large and bulky. None of the door frames I could fit through because it’s such an old house. There were a lot of tight little halls and turns that made it hard to get around even my own house,” Armstrong told New Times.

Home wasn’t the only obstacle for Armstrong. Shell Beach, with its numerous flights of stairs, outdated buildings, and hilly terrain proved to be a significant challenge for the 18-year-old. Several restaurants and cafés limited their disabled parking spots to expand outdoor seating due to COVID-19.

“You can’t always blame it on the businesses for not having an elevator into their location, but that’s a bit of a challenge where we live,” she said.

Armstrong said this is what propelled her to make wheelchair access her personal mission. She started an Instagram page called @miasdisabili.tea in mid-October, five months into being a full-time wheelchair user. On her Instagram page, she focuses on businesses with accessible resources and also gives tips for improving inclusivity.

“I’m trying to make it fun and young. I’m trying to show that being disabled is not the worst thing in the world,” the Cuesta College biomedicine major said.

While she spends a lot of time doing her homework at Steaming Bean — a café she enjoys patronising because of its access ramp and elevator — Armstrong said she’s a beach lover. She is able to get herself onto the sand through self-navigation and with the help of her boyfriend. However, getting to the water is almost impossible without being carried. Most wheelchairs, even custom-made ones like Armstrong’s, aren’t designed to get through sand.

Armstrong said that often resources for wheelchair users are aimed toward senior citizens, making young people with disabilities feeling forgotten. She is asking Pismo Beach to adopt a device called the Mobi Mat that can connect its pier to the oceanfront.

“It’s eco-friendly and doesn’t damage beach life. It’s not permanent; it wouldn’t be a construction project. It’s pretty much like a gymnastics roll-up mat that you just roll across the beach. It would allow people from down the ramp … and over to the water. I just want to get to the water without someone having to carry me that day,” she said.

The idea of the Mobi Mat came about from working with a strategy company called Women Making Waves (WMW) after Armstrong approached its founder about including resources for people with disabilities at its events.

“Mia and I started researching it after we heard about [areas like] Huntington Beach using Mobi Mats,” WMW and Connected Communities Founder Tyler Skinner said.

Tyler’s husband, Bill Skinner, is the former city manager of Coalinga, in Fresno County and his professional experience in local government enabled him to advise Armstrong on whom she should approach with her idea.

“This is a great project for 2022—to create community synergy, to create access to the beach for everyone [who] comes to visit our beautiful coastline,” Bill said.

Bill’s suggestion was to pitch Mobi Mats to Pismo Beach City Council and to the Avila Harbor Commission, which Armstrong said she plans on doing soon.

Tyler said that by collaborating with these public agencies and by suggesting they involve hotels in accessibility projects, the coalition could achieve Public-Private Partnership status, also known as P3.

In fact, Pismo Beach officials told New Times that this kind of union is already engaged.

“We have beach-accessible wheelchairs at no cost because of our partnership with Sandcastle Inn. [People] can obtain it from the hotel. It was done in order to limit access restriction,” Assistant City Manager Jorge Garcia said.

Garcia added that the City Council also amended a municipal code, which prohibited all motorized vehicles on beaches, to exempt motorized wheelchairs from the restriction. Inspired by a Cal Poly prototype test of a wheelchair that can operate on sand, the changed rule went into effect in October.

“Communities can be innovative, and we’re allowing for that innovation [to come into] areas that previously only able-bodied individuals [could] access. We welcome input so all people can feel welcome in Pismo Beach,” he said.

From Dec. 4 – 12, the city will host the Pismo Beach ISA World Para Surfing Championship where para surfers from around the world will compete in a Paralympic-style competition.

Armstrong is also passionate about surfing and hopes for the inclusion of Mobi Mats soon so she can enjoy the sport more with her boyfriend. A Pismo Beach lifeguard, Armstrong’s boyfriend has access to a rescue board with handles on both sides. He paddles it out into the ocean as a makeshift surfboard while she holds onto him.

“Not everyone has a lifeguard boyfriend to carry them out to the beach every day,” Armstrong laughed. “That’s why we need this mat.”