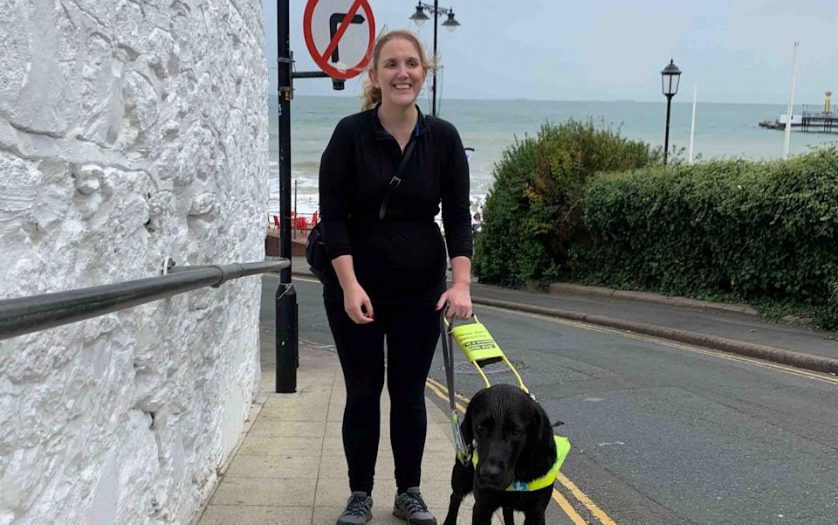 An UK blind woman is speaking out about the ‘humiliation’ and frustration she felt when a restaurant refused her entry with her guide dog Marty.

Siobhan Meade, 37, and her husband Sean Dilley wanted to have dinner at the Taste of India in King’s Lynn on Saturday, October 16. The video she posted on her YouTube channel, Blind Girl Vlogs, showed staff telling Meade that her guide dog was not permitted into the restaurant, reported the Eastern Daily Press.

The restaurant has since apologised, stating it would ensure such an incident would never happen again.

The YouTube content creator and freelance journalist said, “When we walked in we were greeted with ‘dog’s not allowed’, we were trying to establish what was not allowed.

“I said I’m blind and this is my guide dog, and my husband was trying to explain.

“For us it was the attitude more than the refusal, the refusal was shocking in itself but all we wanted to do was dine like anyone else quietly.”

Meade said similar encounters happen “all the time”, recalling that they have been denied access to two restaurants recently.

Adding, “It is a huge issue. It’s always at the back of my mind, if it’s somewhere new I’m literally so anxious and stressed before I even get into the restaurant.

“I’m always thinking are they going to welcome me or am I going to have to fight for my rights.”

She said she decided to go to the media about these experiences because it was important to raise awareness and educate people about the law and discrimination.

“Reliving those moments, going up to the door and being faced with that it’s soul destroying. I can’t put it into words the feeling of sheer embarrassment and humiliation,” explained Meade.

The restaurant manager was called and told the couple that the staff member “did not know” but that the guide dog was, in fact, allowed in their establishment.

Manager Illish Rahman said, “We’re in the town centre so normally we have people trying to bring in a dog, normal dogs are not allowed because people don’t want it. So she didn’t know it was a guide dog.

“As soon as she told me, I handled it and told them that they are allowed. I apologised for this.”

Under the Equality Act, guide dogs and other assistance dogs have the right to enter most services, premises and vehicles with their owners. The purpose of the legislation is to protect people from discrimination and help those with a “protected characteristic”.

The Act sets out specific duties with which “service providers” have to comply.

RNIB (Royal National Institute of Blind People) said that it is illegal for service providers to discriminate against people by treating them less favourably because of their “protected characteristic”, which means disability, gender, sexual orientation, age, religion or belief.

Discrimination in providing services includes refusing to serve or providing a service of a lesser quality than it would to the public.

Research conducted by Guide Dogs revealed the most common places that guide dog owners are refused access to are minicabs, taxis, restaurants and shops.