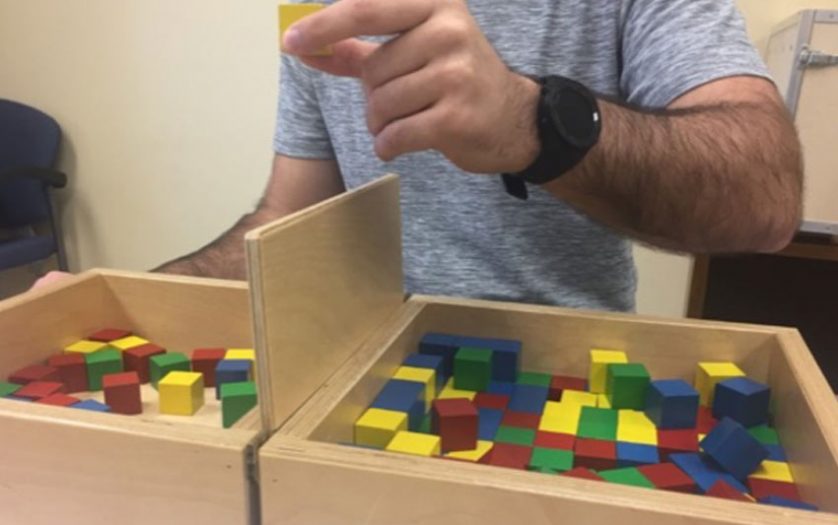 Researchers have found that the extra vibratory stimulus increases activity in the brain during grip tasks, which in turn improves a patient’s hand function after therapy has concluded. Photo: MUSC Health

Every 40 seconds someone in the U.S. experiences a stroke, according to the Centers for Disease Control and Prevention. And because stroke is the country’s leading cause of long-term disability, the effectiveness of poststroke rehabilitation is vital to a person’s quality of life.

Researchers at the Medical University of South Carolina (MUSC) have found that when poststroke survivors wear a wireless wrist band designed to send vibrations through the arm during occupational therapy, they get more value out of their sessions and have improved motor function. As reported in a recent paper published in OTJR: Occupation, Participation and Health, these researchers found that the extra stimulus increases activity in the brain during grip tasks, which in turn improves a patient’s hand function after therapy has concluded.

A stroke occurs when blood flow to a particular area of the brain is cut off, which can lead to brain damage. Na Jin Seo, Ph.D., the primary investigator on the paper and a professor in the College of Health Professions at MUSC, says that the main outcomes in the aftermath of a stroke are issues with mobility and movement. In 65% of stroke cases, those issues arise in the use of a patient’s arms, which led her to investigate using a wrist device as a way to improve current treatment methods.

Working alongside Amanda Vatinno, Ph.D., first author on the paper and a research assistant at MUSC at the time, Seo assessed the effectiveness of a wearable device called a TheraBracelet on patients over the course of a 6-week therapy session.

Vatinno says it’s easy to take the use of your limbs for granted — she even catches herself doing it sometimes. “But tasks that seem simple can become so difficult following a stroke,” she said. “I see people struggling to open a jar or take a drink.”

She says devices like the TheraBracelet can enhance treatment and provide longer-lasting effects. The device works by sending imperceptible vibrations through a person’s arm and up to their brain while they perform everyday tasks. The stimulus primes the sensory cortex in the brain and prepares it for the upcoming movement. Increasing the brain’s activity like this helps with motor output and thus helps patients move their arms more freely and effectively.

Vatinno says the activities they perform with patients could be as basic as brushing their teeth or zipping a jacket, both of which are regularly practiced in occupational therapy without wearable technology assistance. Therapists can also assist patients with practicing more social or sports-driven activities depending on what is important to that patient. “One participant was an avid golfer,” Vatinno said. “So we practiced golf swings in therapy while wearing the bracelet.”

Previous papers have shown that sensory stimulus prior to a therapy session can improve outcomes, but those methods had patients remain still for 2 hours while receiving the stimulus before practicing any movements. That sedentary time was necessary for the treatment plan, and the effects diminished once the stimulation was removed.

Seo and Vatinno’s study was different. “What sets it apart from traditional therapy is adding that particular stimulation,” according to Vatinno. “It’s wireless and can be done during the therapy itself.”

By using the stimulation simultaneously and removing the need for patients to remain sedentary for so long to achieve results, Seo hopes to apply it more easily to clinical practice. Her method has yielded longer-lasting results for stroke survivors, and she hopes to continue to assess its effectiveness. She will need to determine if a time limit for treatment is necessary so patients don’t become desensitized to it, and she’d like more information on how long the treatment lasts. Ultimately, she believes that better treatments will help people regain their independence and improve their quality of life.