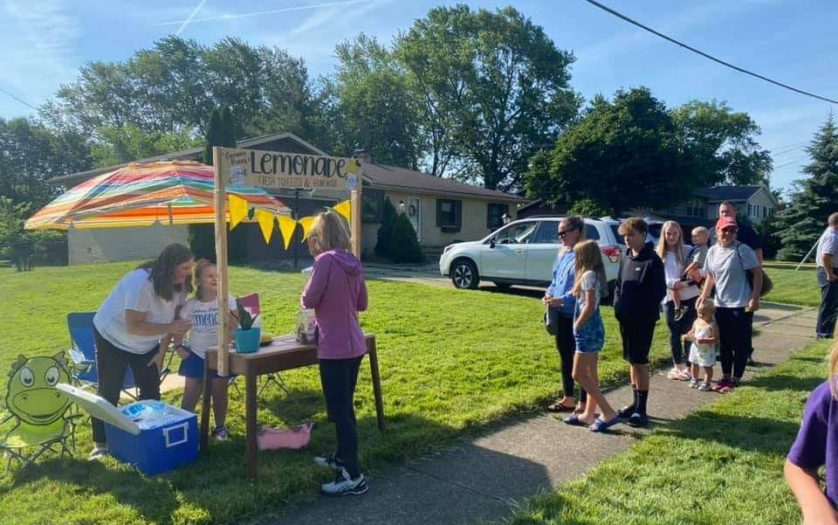 Gwen Ciccozzi, 7 years old, has started a lemonade stand to raise funds for a playground that will be inclusive for all.

Her mother, Rebecca Ciccozzi, explained to ABC affiliate WEWS and the Medina Gazette that Gwen had a perinatal stroke in the womb, resulting in cerebral palsy and limited function on the right side of her body.

“We didn’t know if she would walk or talk or even be able to understand what other people were saying,” Ciccozzi told WEWS.

Due to her disabilities, Gwen has difficulty having fun at the playground in her city of Brunswick, Ohio. The family often have to drive to an inclusive playground 20 minutes away from their neighborhood.

“It’s so hard because we want to be able to run and take Gwen to a playground,” Ciccozzi told the Medina Gazette. “She’s at that stage where she can go to a typical playground, but she can’t enjoy it as much because there’s not as much that she can do with one functional hand.”

“I was so overwhelmed with the generosity of our community,” the Gwen’s proud mom gushed. “She raised so much money. We were in the house and counting it and I said, ‘Gwen, this is a lot of money. Do you think you want to keep this all or should we donate some?’ And she immediately said, ‘The playground.'”

In March, the Brunswick School System released a statement, announcing it would launch a joint fundraising initiative to help pay for the new playground, which will upgrade an existing one at Neura Park to “include accommodation for special needs.”

The cost of the inclusive playground is estimated at $320,000 and will reportedly be completed by March 2022.

Gwen’s lemonade stand raised more than $1,000, according to a Facebook page.

“The inclusive playground is so near and dear [to her]. She understands the need for that inclusiveness,” said Ciccozzi. “When she goes to a typical playground, oftentimes there are things that she struggles to participate in… To have [an inclusive playground] in our neighborhood and our community is our dream.”

The updated Ngā Paerewa Health and Disability Services Standard will…