Argentinian man with disability hopes to go into outer space 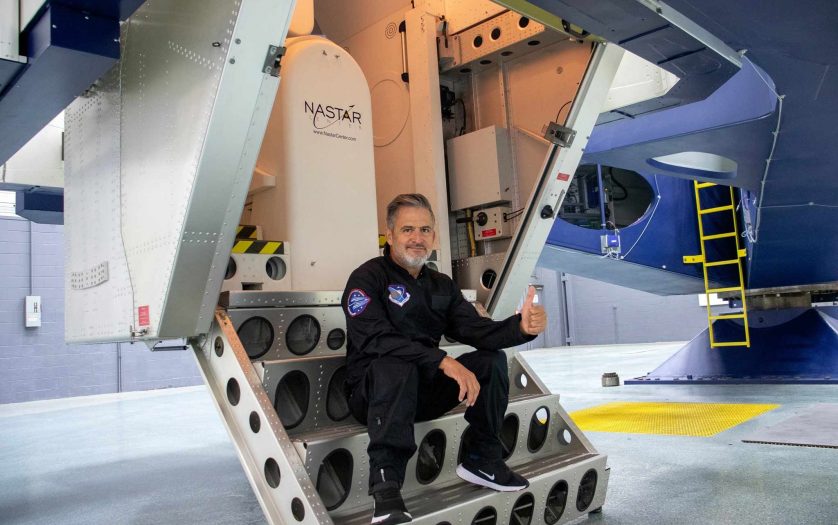 Jean Maggi, 58 from Cordoba, Argentina, hopes to become the first person with a disability to achieve space travel.

Having recently obtained his civil astronaut degree, Maggi can be a passenger on a spaceship when flights for citizens are allowed.

Maggi, who contracted polio when he was a year old, is one of only a few people in the world who have taken special civil astronaut training in the United States that enables him to be a “space tourist.”

Reaching outer space is the next challenge for this athlete who uses crutches to walk.  Maggi was featured in a Netflix documentary last year, telling his story of conquering Khardung La, the highest point of the Himalayas reachable by bicycle.

The Argentine feels that succeeding at space travel will inspire many people with disabilities to strive for goals that they do not believe possible.

After suffering a heart attack at the age of 37, Maggi made the decision to get in shape and did so with sports. He ran the New York City Marathon, participated in Ironman competitions, crossed the Andes on horseback, and competed in alpine skiing at the 2010 Vancouver Paralympic Games.

The Netflix documentary, entitled “The infinite limit” and produced by Juan José Campanella, was Maggi’s golden ticket to begin the first step in his space adventure. Space tourism companies had previously ignored Maggie’s emails – that is until he sent them the link to the documentary.  It was then they paid attention and agreed to let Maggi take the training.

As well as practicing yoga and breathing exercises, Maggi went to Florida to fly in L-39 jets and later, traveled to Philadelphia to experience space flight simulation. He spent two days at the National Aerospace Training and Research (NASTAR) Center, which is the only center authorized by the United States Federal Aviation Administration (FAA) for this type of training.

In the simulator, Maggi experienced the pressure of two forces at the same time, one that compresses the heart and another that empties the brain of blood. It was an extremely difficult test to overcome mentally, as it reminded Maggi of his previous heart attack. NASTAR experts monitored him, making sure he did not lose consciousness.

“They could know that I was fine, but in my mind I had to work or fight against it,” he explained.

Maggi is also the president of the Jean Maggi Foundation, which provides adaptive bicycles to children with disabilities. The foundation has distributed more than 700 adaptive bicycles in its four years of existence.

“I think it would be wonderful for the world to be able, once and for all, to put people with disabilities out of places of inferiority,” Maggi said. “To be able to say ‘here we are all, we move differently but we have our place like anyone else.'”

In the image provided by the Jean Maggi Foundation, Jean Maggi, a 58-year-old Argentine suffering from polio, is seen posing in a space simulator at the National Aerospace Training and Research (NASTAR) Center on the outskirts of Philadelphia, Pennsylvania, the April 9, 2021. Maggi, 58, has just earned her civilian astronaut degree, which will allow her to board as a passenger in a spaceship when ordinary flights are ready to go into space. (AP)