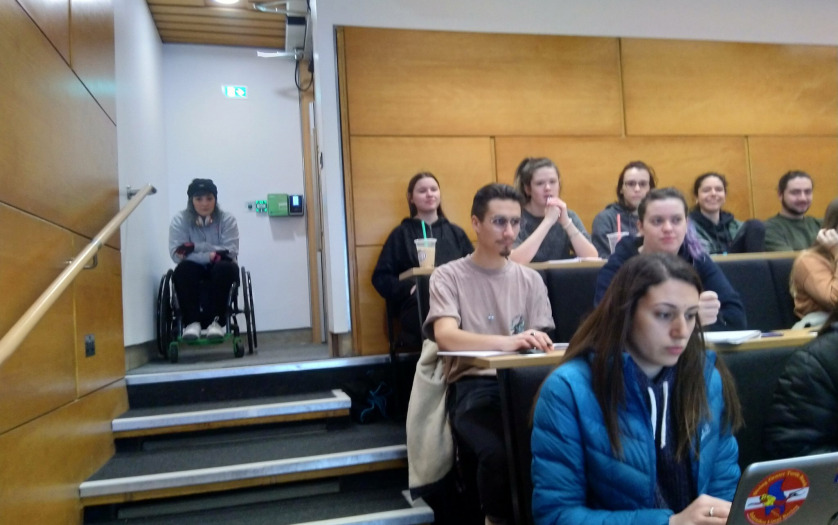 A student has criticised the University of Hull over the lack of wheelchair access on campus saying the institution has “completely missed the mark on what accessibility and inclusion means”, The Independent reports.

Earlier this month Sarah-Marie Da Silva, a first year student of zoology, shared a photograph of herself, taken by her lecturer, on Twitter. It shows her sitting at the back of a lecture theatre unable to get down the stairs or sit with her peers. The 21-year-old from Bedford says in the session last Friday she was unable to take notes or use equipment to record the lecture because she didn’t have a desk and couldn’t see the screen. But far from a one-off experience, Da Silva tells The Independent that since she started in October 2019 she has experienced access issues “in pretty much every building” she has been into on campus – some of them are only three years old.

She explains: “Stair lifts are often broken or unusable. In the library, there is a slope to get to the reading room and there is no rail, which is a massive hazard, especially for those with mobility disabilities,” she says, “In the labs, I have the corner of a bench that is adjustable, everyone else has the whole bench. Which has meant that sometimes I can’t complete my entire practical.”

On another occasion Da Silva claims a lift shut closed on her arm because it didn’t sense her wheelchair. She reported the incident but says complaints have not been taken seriously by staff.