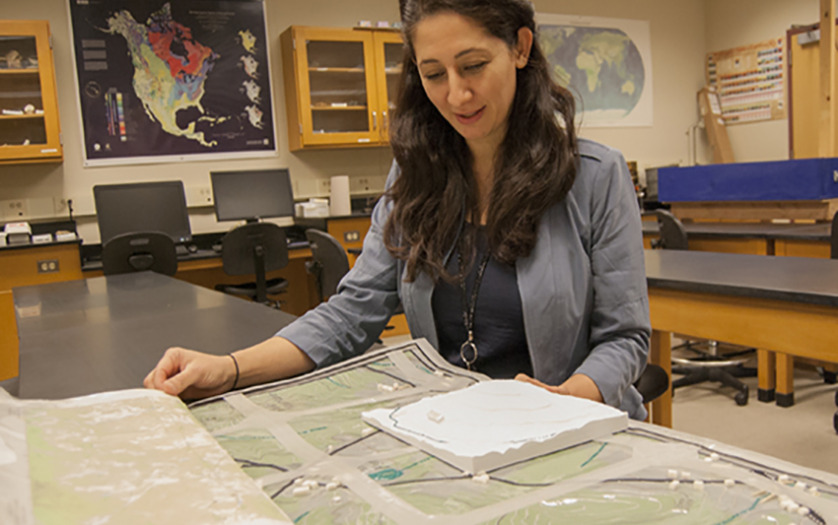 What started out as a way to help one student with a vision disability turned into two major projects from Dr. Katayoun Mobasher, professor of geology in the Institute for Environmental and Spatial Analysis (IESA) at the University of North Georgia (UNG), US.

The first idea arose in 2011 when Mobasher realized a student with vision disability enrolled in her geology class could not see the different lines and distinctions on a general 2D map.

“Geology is a field-based science and we also look at a great deal of maps,” Mobasher said, pointing to different attributes on a map. “With a visually impaired students, you can’t teach these concepts in a traditional way.”

The professor tackled the problem in January 2017 thanks to a Presidential Incentive Award. With the funds, Mobasher invited Efren Chavez and Carol Kraemer as consultants to the project and together, they created a two-layer 3D tactile map. The first layer of the map allowed a visually impaired student to learn the coordinates which were broken down it into boxes or zones. The second layer had Braille and textured lines to indicate different elevations, geographic features, and even small buildings.

With the map, a visually impaired student can use his or her fingers to feel the differences on the map. To Mobasher’s surprise, it helped others as well.

Now many groups from the Atlanta Geological Society and Georgia Geological Society to geologists outside of the United States wish to collaborate with her on the project or want help creating their own. Mobasher attributes this interest to a 2018 article about her work published in ArcNews,  which is a free publication printed quarterly that provides news on GIS, geospatial technology and Esri software to the Esri user community as well as others interested in mapping and GIS technology.