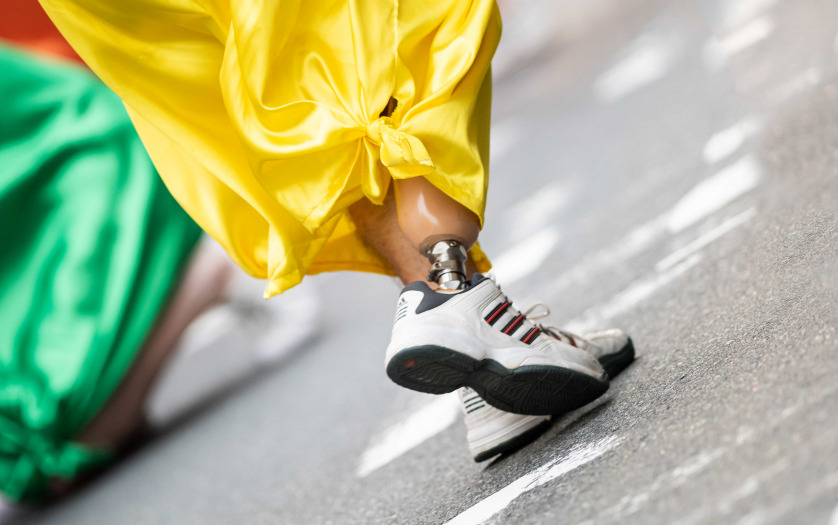 Two volunteers are the first above-knee amputees in the world to feel their prosthetic foot and knee in real time. Their bionic prosthesis, which was developed  by an international team of researchers, features sensors that connect to residual nerves in the thigh. The resulting neurofeedback greatly reduces physical  and mental strain for users of the prosthesis, as well as their phantom limb pain, while increasing their confidence and speed when walking.

While walking, people with intact legs feel when they move their knee or when their feet touch the ground. The nervous system constantly draws on sensory feedback of this sort to precisely control muscles. People using a leg prosthesis, however, do not know precisely where the prosthesis is lo- cated, how it is moving, or what type of terrain it is standing on. They often cannot trust their prosthe- sis completely when walking, leading them to rely too often on their intact leg, which in turn reduces their mobility and causes them to tire quickly. A simple walk on pebbles or sand, for example, can prove very exhausting for people using a prosthesis. Furthermore, people with amputations can expe- rience phantom limb pain, a condition that existing medications often cannot treat. Savo Panic, who experiences this phenomenon, says he wakes up at night due to the phantom pain: “The toe that I don’t have hurts. My big toe, foot, heel, ankle, calf – they all hurt, and I don’t even have them.”

An international team of researchers led by ETH Zurich and Lausanne-based start-up company Sens Ars has now developed an interface to connect a leg prosthesis with the residual nerves present in the user’s thigh, thus providing sensory feedback. In a study conducted in collaboration with the Uni- versity of Belgrade, the scientists tested this neurofeedback system with two volunteers who have an above-knee leg amputation and use a leg prosthesis (one of whom is Panic).