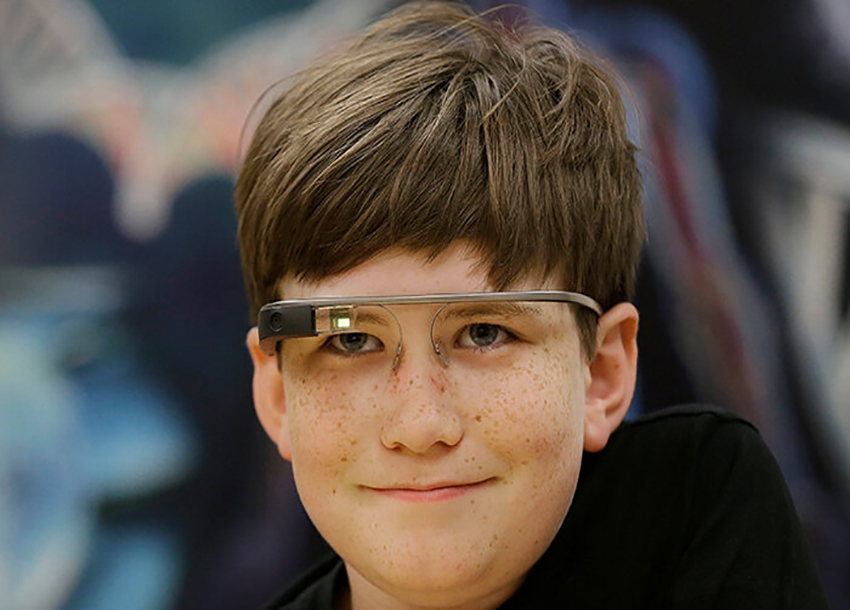 Julian participated in the Stanford study to test how a smartphone app paired with Google Glass can help children with autism understand emotions conveyed in facial expressions. Photo by Steve Fisch

A team of NIH-funded researchers at Stanford University Medical School has found that children with autism improved measurably on a test of socialization and learning when their therapy included an at-home intervention with Google Glass. Google Glass is a headset worn like eyeglasses that provides augmented reality on a miniature screen, with sound. The smart system of eye wear and mobile-phone-based games helped the children with autism understand emotions conveyed in facial expressions.

The Stanford team used Google Glass’s built-in camera along with software customized to run on a smart phone as an intervention that care givers used with their children at home to supplement clinic-based therapy.

A camera in the device captures the facial expression of family members in the glasses’ field of view, reinforcing what the child sees by providing an image and audio prompt. It detects up to eight emotions: happy, sad, angry, scared, surprised, disgusted, “meh,” and neutral. The glasses are wirelessly connected to a smartphone device that may be operated in three different play modes. There is ‘find the smile’ game, where the child is prompted to say something that prompts an expression in the family member’s face; the ‘guess the emotion’ game, where the family member asks the child to guess the emotion from the family member’s face; and free play, an unstructured mode of identifying facial expressions.

For more about autism, go to: https://www.nimh.nih.gov/health

The study: Effect of Wearable Digital Intervention for Improving Socialization in Children With Autism Spectrum Disorder: A Randomized Clinical Trial